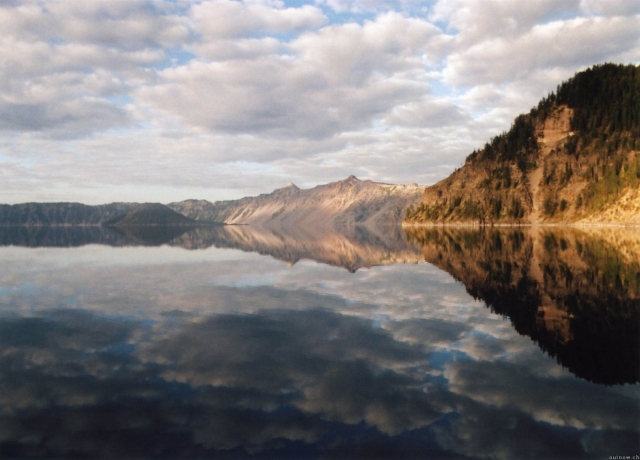 A still from James Bennings’ ’13 Lakes.’

Editor’s note, 12/23/14: I’ve updated this post to reflect the addition to CalArts alumna Lisze Bechtold’s short film, “Moon Breath Beat” to the National Film Registry. Congratulations to Lisze and apologies for missing the film the first time around. -cz

The Library chooses diverse “cultural, historical or aesthetic cinematic treasures” from American history to include in the archive. Films must be at least 10 years old to be considered.

“By preserving these films, we protect a crucial element of American creativity, culture and history,” says Librarian of Congress James H. Billington.

13 Lakes captures shots of 13 great lakes in the U.S., with each shot containing half water and half sky or land. More about the film’s significance from the Library’s statement:

James Benning’s feature-length film can be seen as a series of moving landscape paintings with artistry and scope that might be compared to Claude Monet’s series of water-lily paintings. Embracing the concept of “landscape as a function of time,” Benning shot his film at 13 different American lakes in identical 10-minute takes. Each is a static composition: a balance of sky and water in each frame with only the very briefest suggestion of human existence. At each lake, Benning prepared a single shot, selected a single camera position and a specific moment. The climate, the weather and the season deliver a level of variation to the film, a unique play of light, despite its singularity of composition.

Curators of the Rotterdam Film Festival, where the film was screened in 2005, noted:

The power of the film is that the filmmaker teaches the viewer to look better and learn to distinguish the great varieties in the landscape alongside him. [The list of lakes] alone is enough to encompass a treatise on America and its history. A treatise the film certainly encourages, but emphatically does not take part in.

The five-minute short film, “Moon Breath Beat,” (1980) was created by animator and illustrator Bechtold when she was a student at CalArts, studying with the renowned animator and teacher Jules Engel. From the Library of Congress:

Engel asked, hypothetically, “What happens when an animator follows a line, a patch of color, or a shape into the unconscious? What wild images would emerge?” “Moon Breath Beat” reveals Bechtold responding with fluidity and whimsy. Her two-dimensional film was animated to a pre-composed rhythm, the soundtrack cut together afterward, sometimes four frames at a time, to match picture with track, she says. The dream-like story evolved as it was animated, depicting a woman and her two cats and how such forces as birds and the moon impact their lives…

Lasseter’s two-minute Pixar animation, Luxo Jr. (1986), was the first CGI film to be nominated for an Academy Award in 1987. The short about an adult lamp watching a younger lamp play with a ball became the inspiration behind Pixar’s iconic bumper. More from the Library’s statement:

In strikingly vivid animation, Lasseter and Reeves manage to bring to joyous life these two inanimate objects and to infuse them both with personality and charm—qualities that would become the norm in such soon-to-be Pixar productions as Toy Story, Cars and WALL-E.

The 2014 selections bring the number of films in the registry to 650. See the full list.

Other CalArtian films that were inducted into the National Film Registry: