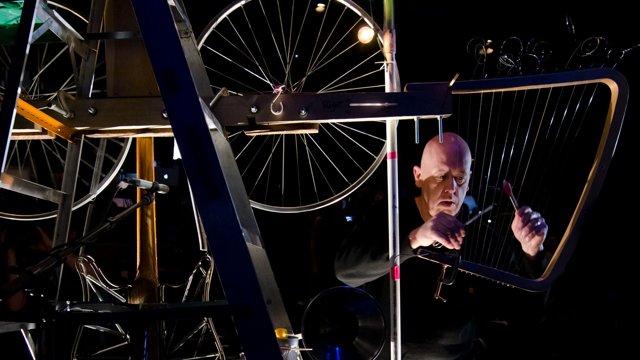 Herb Alpert Award winner Rinde Eckert is the writer and performer behind the opera Aging Magician, composed by Paola Prestini. Based on If the Aging Magician Should Start to Believe, a short story by Jonathan Safran Foer, the work follows Harold, a reclusive older man who goes on a train ride to Coney Island on what will prove to be his final trip. Aging Magician takes the audience on a journey of uncovering one’s legacy, brought to life through theater, music and puppetry.

Performances of Aging Magician (trailer above) run from Jan. 11-13 at Park Avenue Armory.

Timur and the Dime Museum

The West Coast dark-glam opera band Timur and the Dime Museum returns to Prototype Festival for a one-night-only show at Joe’s Pub on Jan. 11. The band brings its unique fusion of pop, avant-garde and vaudeville sounds to the stage as they perform songs from their upcoming album Collapse, a post-ecological requiem for the planet.

Below is a video excerpt from Collapse.

In this opera, the character, Child, must deal with promises made and broken before she was born. On the eve of her 15th birthday, she is visited by the ghosts of her three older sisters, all taken before their 15th birthdays by bath, by wash and by rain. She learns of the deal that Mama made with The Lake by their house and the fatal consequences of her forgetfulness.

Reid first started work on the opera in her final year at CalArts and has continued its workshopping and development after graduation. With performances by Kalean Ung (Theater MFA 12) as Child and faculty member Mary Lou Rosato as Mama, Winter’s Child reveals a world where nature holds power and a family must confront it to change a youngest daughter’s fate.

Listen to an excerpt from Winter’s Child.