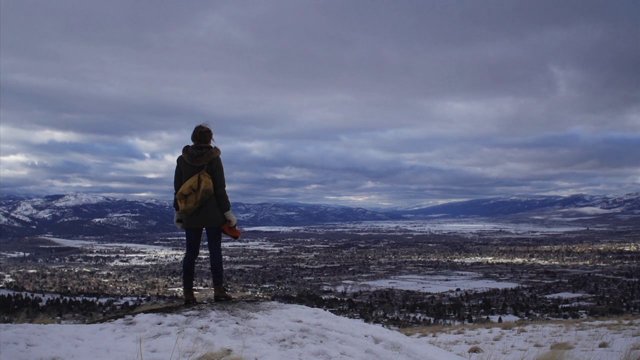 A deliberation on displacement and adaptation, the film follows Doris, a thirty-something American who just moved to Montana to teach ESL at the local university. She grows increasingly alienated from her new surroundings, shunning her fellow teachers and taking aimless road trips. In contrast, her class of international students (all played by actual English language learners) slowly forge connections with their fellow students and their new community.

“Each shot of the movie is like an individual pretty picture—a literal bella vista,” writes Migizi Pensoneau of Missoula Independent. “Doris, through most of the movie, appears as either tiny against a huge landscape, or set out of frame or out of focus to everyone else. She does little and says little, yet she occupies the film with a presence that’s overwhelmingly lonely. It’s a deftly purposeful tack to take on Brunner-Sung’s part, making the film a meditation on emotion and place.”

In a press release, Brunner-Sung writes:

I am interested in what happens when we are separated from our origins. The child of immigrants to the United States, I grew up in a land that considers this removal a promise of freedom and opportunity. But what are its consequences? Bella Vista explores both sides: the perils of rootlessness, as well as the optimism of new beginnings.

Bella Vista has screened in several film festivals around the world and won for Brunner-Sung the George C. Lin Emerging Filmmaker Award at last year’s San Diego Asian Film Festival. Above is the trailer for the film.