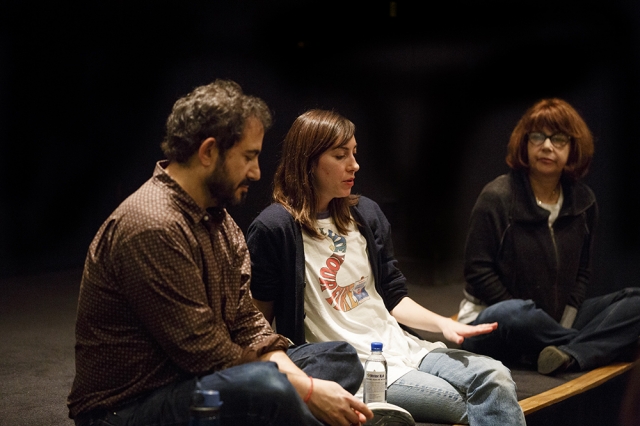 Coppola decided to write and direct Palo Alto to represent what was, for her, what coming-of-age was all about. “The film is, to me, distilled youthful longing.”

“Ms. Coppola… does a lot right here, including coaxing out sympathetic characters who, in other hands, could have been ciphers,” writes Manohla Dargis of The New York Times in her review of the film. “Her quiet, attentive filmmaking goes a long way toward distinguishing the material.”

Below is a trailer for Palo Alto:

In a Q&A that followed the screening, Coppola talked about the film, her close relationship with the film crew and gave the students some helpful tips on adaptation.

When asked how she works with actors, particularly young actors, she answered, “I tried to have a set wherein there were no hierarchies. I gave them hour-long lunches, fed them good food. That way I created a family and gave everyone a safe space. I made sure everyone was comfortable with each other… During rehearsals, we’d get to know each other and play improv games.”

Coppola talked about the importance of following intuition and with trusting the film and the process. “The movie kind of tells you where it needs to go,” she said. “You can’t wait for the perfect moments. You just have to go with the flow, deal with problems as they come and let the movie be its own thing. At first, I was upset because the film didn’t turn out as I first envisioned it, but I realized I had something better.”

She also talked about the challenges of editing and in receiving feedback, saying that “editing is where your film comes alive,” and, “Issues in your script become 10 times harder to deal with during editing.

“Feedback is tricky. When you’re so immersed in editing, you need a fresh set of eyes to look at your film for you to see if it still makes sense. What we did was use a questionnaire wherein people had the chance to explain why they had issues with a certain scene, if they wanted to. So I think that if you use test screenings in the right way, they can help.”

Coppola also mentioned her family, particularly her grandfather, who gave her advice on how to adapt text into a movie. When asked about Sofia, she said: “I very much look up to Sofia and to her style. I’ve always looked at her as my older sister, and for me, she can do no wrong. Grandpa is kind of a big presence, and he’s the type of person who likes showing us how it’s done. But Sofia’s style of directing felt more relatable to me. I think she’s been able to make it work in a way that feels right to her nature. She was the one who made directing feel tangible to me, made me think that I could do it, too.”