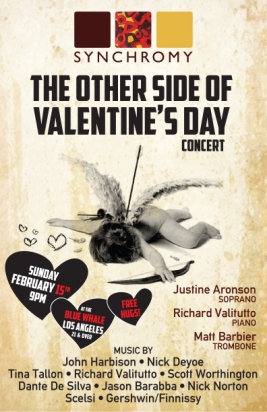 On Feb. 15, the Blue Whale in Downtown Los Angeles hosts an anti-Valentine’s Day concert for anyone who would rather not celebrate the love-themed holiday. The Other Side of Valentine’s Day, presented by the composers’ collaborative Synchromy, features music about love gone wrong, heartbreak and “Singles’ Awareness Day.”

Synchromy is sick of Valentine’s Day romantic music soirées for lovers. What about the rest of us? What about getting kicked in the face by reality the next day, or heating up a frozen dinner alone and re-watching High Fidelity on the night of the 14th? In honor of the day after Valentine’s Day, Synchromy presents a concert of music about love gone sour. And whiskey sours.

The program includes the world premiere of several song cycles, among them Valitutto’s Walk of Shame. Also on the program are Giancinto Scelsi’s Mantram: Canto Anonimo and Michael Finnissy’s arrangement of George Gershwin’s They’re writing songs of love, but not for me.

The “concert/therapy session” begins at 9 pm.

The Other Side of Valentine's Day