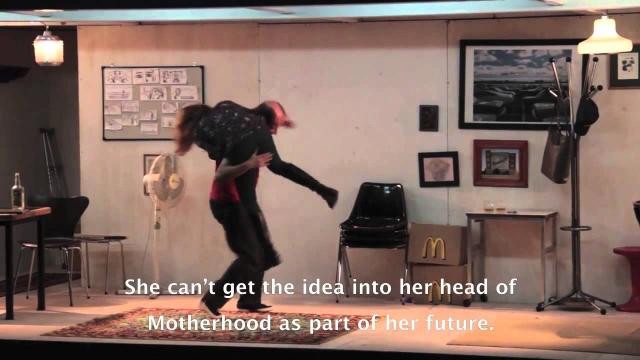 Beginning tonight (Feb. 12), Buenos Aires-based theater director Mariano Pensotti stages Cineastas at Roy and Edna Disney/CalArts Theater (REDCAT) in Los Angeles. Pensotti’s work can be characterized as fiction overlapping with everyday life unfolding on inventive stages, as with his 2012 US debut El pasado es un animal grotesco (The Past is a Grotesque Animal).

He brings that same trademark to Cineastas, which tells the story of four filmmakers while simultaneously depicting the films they are in the process of making. A split-level stage plays out these events simultaneously, blurring the line between the filmmakers’ lives and art. Pensotti interviewed more than a dozen filmmakers for Cineastas, to gain an insight on “how their fictions are connected to or even transform their private lives.”

The production adapts cinematic techniques for the stage—flashback, montage, cross-cuts, voice-over—combining the onetime film director Pensotti’s current and past media. In a New York Times article, Pensotti says that the fusion of theater and cinema is the synthesis of the “concept of things that are ephemeral as opposed to things that are made to last.”

Cineastas runs through Feb. 21. Above is a promotional video for the production.