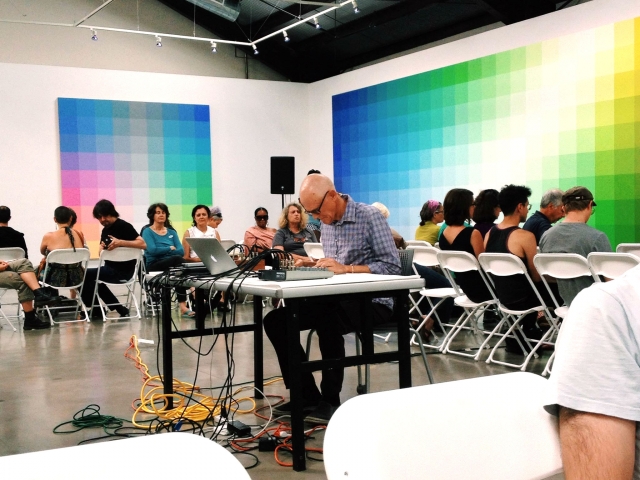 Editor’s Note: David Rosenboom, dean of The Herb Alpert School of Music at CalArts, penned the following tribute for his friend and colleague Mark Trayle—a sound artist, composer and longtime CalArts faculty member who passed away earlier this week.

A master of interactive sound worlds has left us. Many already know that a member of our core faculty, who worked for many years at the heart of our school, has passed away. After courageously facing the challenge of a relentless disease advancing in its affront on his body, and with an outward demeanor of calm acceptance that could only emanate from a centered soul, Mark Trayle has died.

I write from afar, away on leave, where I heard the news just yesterday. I first met Mark Trayle around the end of the 1970s and beginning of the 1980s, when he was a graduate student in the Center for Contemporary Music at Mills College. There he studied with various composers like Robert Ashley, David Behrman and me. He was already brilliant, already conceiving unique means for engaging audiences in new domains of electronic music and installation art. Many years later, he won a search for a faculty position in composition at CalArts, and as the years went by, he became a principle source of energy and ideas for the development of our Experimental Sound Practices Program, a unique one in the world. He also served as Co-chair of the Composition Program for a considerable time.

Mark was devoted to his students, always taking a hefty load of lessons and independent study projects, leading each emerging artist carefully through complex labyrinths of circuitry, software and musical forms, while always insuring they stay mindful of the artistic motivations that had drawn them to their journeys in the first place. Mark contributed mightily to our curriculum; and I like to mention his innovative class, Spectromorphology, in which he developed an approach to ear training that concentrated on listening skills for parsing sound as raw material, free from stylistic contexts. Mark was a strong motivator in our efforts to build the Wave Cave gallery. The gold glitter that periodically fell on piezoelectric crystals during his opening Wave Cave installation, Zephyrs, let us feel a delicacy that often characterized Mark’s works.

More examples than I can list here pop to mind highlighting Mark’s creative endeavors. He possessed a sound as a performer, a sound those familiar with recent electronic music would not mistake. He developed his own instrumentation. He was famous for his use of electronic drawing tablets as sound controllers and for his pieces that were made from data stored on credit cards. The last Trayle performance I saw and heard was when he played with Wadada Leo Smith’s ensemble at Zipper Hall during last September’s Angel City Jazz Festival. He was characteristically sensitive, engaging, and sonically enlightening. Mark and Wadada had developed a long collaboration as performers and, for quite a few years, taught a class together in experimental electronic ensemble creation. Another remarkable example was Mark’s spearheading one of the very best realizations I ever experienced of composer, David Tudor’s, legendary Rainforest in The Walt Disney Modular Theater at Calarts in 2001. This was part of a David Tudor Symposium sponsored by the Getty Research Institute, during which Mark also collaborated with Ron Kuivila from Wesleyan University to create new realizations of some of Tudor’s monumental electronic works. Mark will always be remembered as a key member of The Hub, a pioneering electronic ensemble that used networking technology to connect the instruments of each performer together in amazing, data-sharing music.

Finally, I will always remember when late last semester I invited Mark to give a talk about how he positioned his work and himself as a performer-composer for our DMA Performer-Composer Seminar. Though clearly struggling, he gave a touching tour of his life’s work, an experience those in the room will treasure.

We—and I personally—will miss Mark Trayle. Let’s honor the enriching moments we’ve shared, and give delicate pause to their memory.

Mark Trayle in concert from Séan O’Sharp on Vimeo.