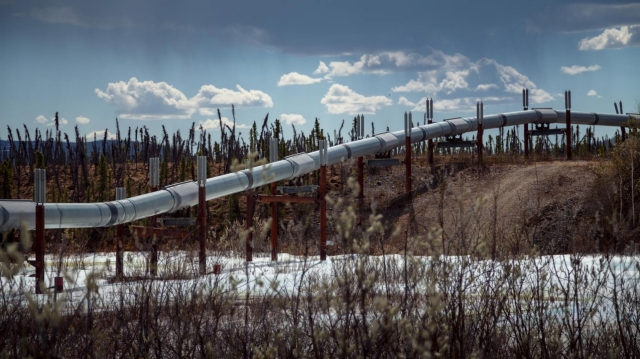 Topophilia is a 63-minute study of the Trans-Alaska Pipeline System (TAPS), the 800-mile crude oil pipeline that runs from Prudhoe Bay to Valdez in Alaska. It is one of the longest crude oil conduits in the world, and also one of the most productive in the United States.

The film is shot entirely with a stills camera and makes use of frame by frame animation, time-lapse photography, looped sequences and layered field recording compositions, portraying TAPS’ inherent linearity and its repetition in construction.

“I’d long admired both the story of TAPS and the structure itself, which I came to understand as a giant continuous building,” Rappmund says in an interview with The L Magazine. “For Topophilia, I chose clips suggesting the landscape reorganizing itself around it; we gain a clearer understanding of the environment through the pivot point of an object placed there. The film unfolds entirely through sequences of animated still photographs, in keeping with the dichotomy of a lifeless man-made structure and its vivid environmental surroundings. It was important to me to highlight interplay (and even ambiguity) between the artificial and the natural. An elemental, repetitious subject allowed me to experiment with different methods of working and to discover previously unknown-to-me rhythms.”

The film also screens on Feb. 26 as part of Documentary Fortnight 2015: MoMA’s International Festival of Nonfiction Film and Media.

Above is a trailer for Topophilia.