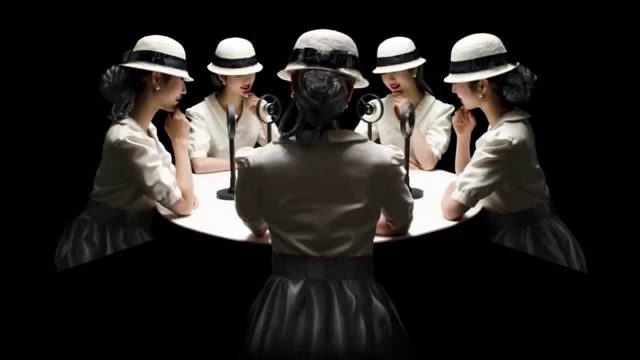 This week (Feb. 26-28), Japanese visual artist Miwa Yanagi presents her new staged work Zero Hour: Tokyo Rose’s Last Tape at REDCAT. Utilizing her brand of theater infused with photography, the new work explores the story of a young, Japanese-American woman who was forced to serve as a radio broadcaster for a Japanese propaganda program during World War II.

Marking the 70th anniversary of the end of the war, the production is based on the true story of Iva Toguri (1916-2006), aka Tokyo Rose. Toguri visited Japan after she graduated from UCLA and was stranded there after the Japanese attack on Pearl Harbor, Hawaii, in 1941. Forced to renounce her U.S. citizenship, Toguri was eventually asked to host the radio show Zero Hour, a propaganda and entertainment program aimed at decreasing the morale of U.S. soldiers stationed in the Pacific theater. After the war, Toguri returned to the U.S. and was convicted of treason, serving six years in prison. President Gerald Ford pardoned her in 1976.

REDCAT says that Yanagi’s work “brims with iconic imagery from her rich body of photographic work,” while simultaneously telling Toguri’s multi-layered story of being caught between two nations during the war.

Yanagi’s North American debut as a theater artist, Zero Hour will be performed in English and Japanese with English subtitles. The work is presented by the Japan Society, New York as part of the Society’s series Stories from the War, which includes theater performances, film screenings, lectures, panels and educational opportunities for young people.

Watch a video of Toguri recording her broadcast in 1945. Above, is a trailer for Zero Hour.