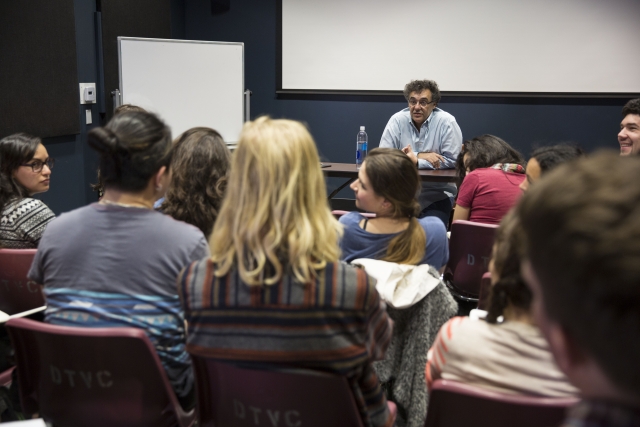 The School of Film/Video’s Guest Artist Workshop, taught by Deborah LaVine and Jon Reiss, welcomed writer, director and CalArts trustee Rodrigo García to campus on Feb. 12 to speak to MFA Film Directing students. An industry veteran, García has produced and directed dozens of feature films and television series, including TV shows Blue (2012) and In Treatment (2008), and features Mother and Child (2009) and Nine Lives (2005).

During the workshop, García asked students to pitch short narrative film projects that they wrote; the exercise gave them an opportunity to not only practice pitching, but also gave them a chance to hear feedback on their ideas. He asked students to only pitch what would appear on screen and omit the back stories that aren’t included in the film.

The filmmaker also spoke to students about the importance of creating suspense in filmmaking, introducing the conflict of a story as soon as possible and creating dynamic characters. García detailed his own process of writing a script from start to finish.

García most recently wrote and directed, Last Days in the Desert, which premiered at the Sundance Film Festival last month. The 98-minute adventure/drama stars Ewan McGregor as Jesus Christ. Below is synopsis from IMDB:

An imagined chapter from Jesus’ forty days of fasting and praying in the desert. On his way out of the wilderness, Jesus struggles with the Devil over the fate of a family in crisis.