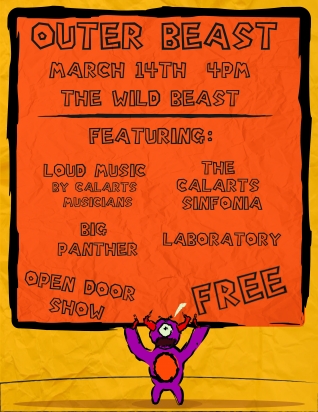 Scheid and Park asked student composers to submit loud music limited to 45 seconds, to fill a 45-minute slot on the program. Sheid says that the submissions range from a piece for 10 guitar amps to pre-recorded electronic compositions.

Also on the program are performances by two CalArtian-helmed groove-based bands, Big Panther and LABoratory, each performing a 45-minute set.

Interspersed between the aforementioned music are short performances by the CalArts Sinfonia, an ensemble of performers who can’t play their instruments—resulting in absurdist takes on classic orchestral repertoire. More from an open call for participants from Scheid:

The CalArts Sinfonia is an ensemble that welcomes anyone and everyone to perform on any instrument they want, as long as they DON’T know how to play it! That’s right! Find an instrument you suck at or have always wanted to play, practice for a few days, and join the CalArts Sinfonia! We’ll take anybody!

The Sinfonia will be joined by the CalArts “Master Chorale.” Scheid says the ensemble is for “non-vocalist pop-star dreamers.” The group will perform, among other pieces, Also Splat Zathura (a riff on Richard Strauss’ Also Sprach Zarathustra), In Anything (based on Terry Riley’s In C) and Gopher Tuna (Carl Orff’s O, Fortuna from Carmina Burana).

Scheid says that the CalArts Sinfonia was inspired by another “good bad ensemble” from the ’70s, The Portsmouth Sinfonia, which included composer Brian Eno, who played clarinet. Below, the ensemble performs their 1974 version of Also Sprach Zarathustra:

Park and Scheid previously staged performances at CSU Long Beach with the Long Beach Sinfonia and Master Chorale. Listen to their version of Gopher Tuna below (music starts at 1:00):