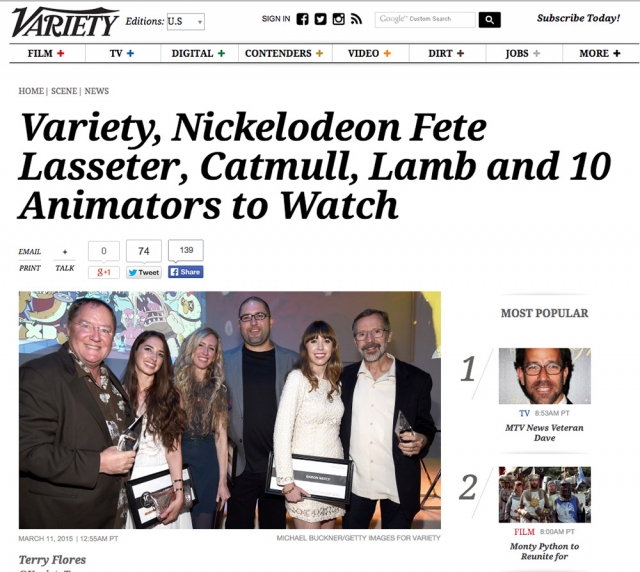 On March 10, Nickelodeon and Variety magazine honored both animation veterans and 10 new talents in their inaugural “10 Animators to Watch” event at Siren Studios in Hollywood.

The three veterans recognized were: California State University, Fullerton’s Dana Lamb, who was named Animation Educator of the Year; and Walt Disney and Pixar Animation Studios’ Ed Catmull, President, and John Lasseter (Film/Video BFA 79), Chief Creative Officer/Principal Creative Advisor of Walt Disney Imagineering, who were both hailed for their Creative Impact in Animation.

CalArts alumnae Lorelay Bové (Film/Video BFA 07) and Daron Nefcy (Film/Video BFA 09) are included in this year’s “10 Animators to Watch” list, which also names Josh Cooley, head of story for Pixar’s upcoming animated film Inside Out; and Timothy Reckart, whose student film Head Over Heels was nominated for Best Animated Short at the Oscars in 2013.

Bové grew up in Spain always wanting to work for Disney, and today she is a visual development artist for Disney Animation Studios. According to Variety, Bové “has become an heir to the Mary Blair mantle.” Blair, whose work and influence can be seen in Disney classics such as Cinderella and Peter Pan, is herself a Chouinard alumna, graduating in 1933.

Nefcy’s Star Vs. the Forces of Evil, a TV show in the vein of the Japanese animé Sailormoon (which Nefcy grew up watching) premiered on the Disney Channel in January. A second season is already in the works. Nefcy is only the second woman to create an original Disney Television Animation series, 18 years after Sue Rose’s Pepper Ann.

At Tuesday’s ceremony, Nefcy gave the following advice to aspiring animators: “Keep making stuff. CalArts made us make a film every year and now anyone can do that anywhere. The technology’s there. It’s never going to be good the first time, then it gets better the second time, and you keep getting better.”

View the gallery of the 10 Animators to Watch, with each animator’s self-portrait, here.

Below is the opening credits for Nefcy’s Star Vs. the Forces of Evil.