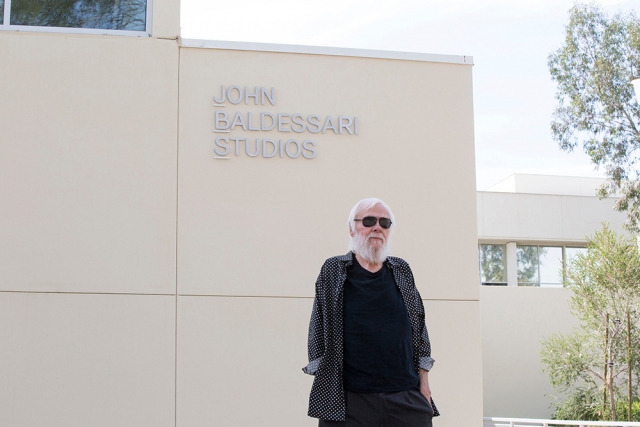 CalArts dedicated the new John Baldessari Studios on March 10 with a celebration that paid tribute to the building’s namesake—the influential Los Angeles artist who helped establish an innovative education program that has produced many of the world’s leading contemporary artists. Baldessari attended the event along with some of his former students, other artists and arts patrons who contributed to the $2 million fundraising effort for the building as well as student scholarships in the School of Art.

CalArts President Steven D. Lavine noted that while there are museums named after artists and dedicated to their work, it’s rare for an educational institution to name a building after a living artist. Lavine said that it made sense to name the building after Baldessari, not only because of the impact he had on the school when he was teaching at the Institute as a founding faculty member, but also because of the influence he will have on future generations of art students.

“John’s direct impact on students was profound,” Lavine said, naming a long list of CalArts alumni whom Baldessari mentored, including Eric Fischl, Mike Kelley, Tony Oursler and David Salle. “John will remain an inspiration for years to come, and when we’re all gone, his spirit will continue to pervade the art and lives of our students.”

CalArts Trustee Jill Kraus, co-chair of the CalArts Art Benefit & Auction fundraiser, said that the effort was unprecedented, including gallery exhibitions and sales and an auction at Christie’s in New York last year of work donated by some of the world’s leading artists. “No art school had ever attempted a fundraising model like this before.” 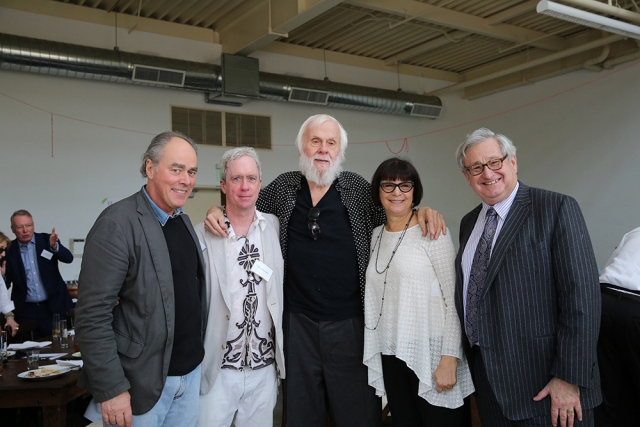 The Baldessari Studios building is a separate structure with a total of 7,500 square feet that includes 16 artist studios, an exhibition space, and a large light-filled painting room. Thomas Lawson, dean of the School of Art, said, “While we’re driven here by ideas, students also make things. For years, our classrooms were all in dark, carpeted rooms, and part of my mission has been to get a studio classroom with concrete floors and natural light. So it’s finally here.”

When Baldessari was asked to speak, he paid homage to one artist’s project in the early 1970s that characterized the open-ended nature of art making that he has advanced. “Matt Mullican stood outside the building with a small mirror that reflected the sunlight onto a mirror held by another student that was then reflected onto another mirror and on and on into the building until a little spot of sunlight shined on a wall in the classroom,” he said. “That gives you an idea of some of the fun we had.”

Many of the studios in the building are named after CalArts alumni, including Oursler, who was largely responsible for persuading other artists to donate their work in honor of Baldessari and to help CalArts. “I feel so connected to this school and what it’s done for me and my friends,” he said. “To see all of this flow into this architecture is wonderful. This space will allow people to be creative.”