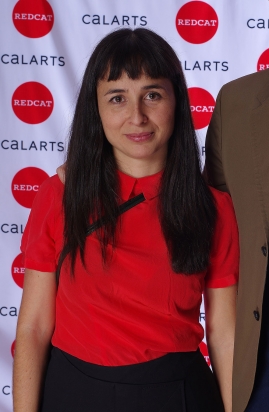 Ruth Estévez at the 2015 REDCAT Gala. | Photo: Steven A. Gunther

On March 17, international art resource Artnet released the list, “25 Women Curators Shaking Things Up”, which names the up-and-coming female curators who could be—according to the online magazine—the next Helen Molesworth, who was recently hired as head curator of the Museum of Contemporary Art (MOCA) in Los Angeles, or Ann Temkin, chief curator at Museum of Modern Art (MoMA) in New York.

Among this list of international and US-based curators is Ruth Estévez, gallery director and curator at Roy and Edna Disney/CalArts Theater (REDCAT) in Downtown Los Angeles.

Bilbao-born Ruth Estévez was previously at Museum of Contemporary Art Carrillo Gil in Mexico City; while in Mexico she co-founded the nonprofit LIGA, Space for Architecture. At REDCAT, she’s worked with artists including Pablo Bronstein, Javier Tellez and Allora & Calzadilla. Among upcoming projects are Hotel Theory, a group show looking at the performance of theory, and, in collaboration with The Getty Institute, a re-staging of a performance piece by the late Argentinian artist León Ferrari, who deployed sculpture and poetry as “revolutionary weapons” against war, political authority and religion.

Currently on view in REDCAT’s gallery is Agency Assembly (Before and After the Split Second Recorded), a collection of “things” that resist categorization between culture and nature, manmade creations and facts—often these are court proceedings, case documents or controversies about intellectual property rights.

Agency Assembly also features public assemblies that bring together scholars and the community to engage in discussions regarding a “thing” on view. A recently concluded assembly featured a debate on whether women playing roles in Samuel Beckett’s Waiting for Godot is an infringement on his copyright. The next public assembly is on March 25 and will tackle the songwriting controversy surrounding “Satin Doll” by Duke Ellington and Billy Strayhorn.