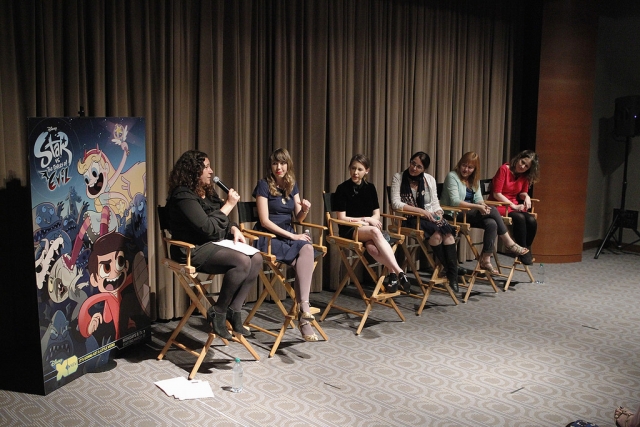 On March 18, Disney Television Animation and the nonprofit networking organization Women in Animation teamed up for a special screening event and discussion of Disney’s latest animated series Star vs. The Forces of Evil. Created and executive produced by CalArts alumna Daron Nefcy (Film/Video BFA 09), Star makes her debut on Disney XD on March 30.

Two episodes, including the pilot “Star Comes to Earth” and the never-before-seen “School Spirit,” were screened at Walt Disney Studios before an appreciative audience of animation industry professionals.

Following the sneak previews, invited panelists—Nefcy, actor Eden Sher (who voices Star), Maija Burnett, director of CalArts’ Character Animation Program, along with Disney Television Animation’s Senior Vice President of Production Lisa Salamone and Director of Animation Talent Development Brooke Keesling, took to the dais to discuss the show’s development and the general state of women in the animation industry. (CalArts was well-represented on the panel as Keesling’s also an alumna of CalArts’ Experimental Animation MFA program and a current Character Animation faculty member.)

Variety Features Editor Malina Saval served as the evening’s moderator and interviewer, and first asked Nefcy to talk about the origins of Star vs. The Forces of Evil, noting that the titular character debunks the traditional princess roles. (She fights off monsters and tames wild unicorns like no other.) 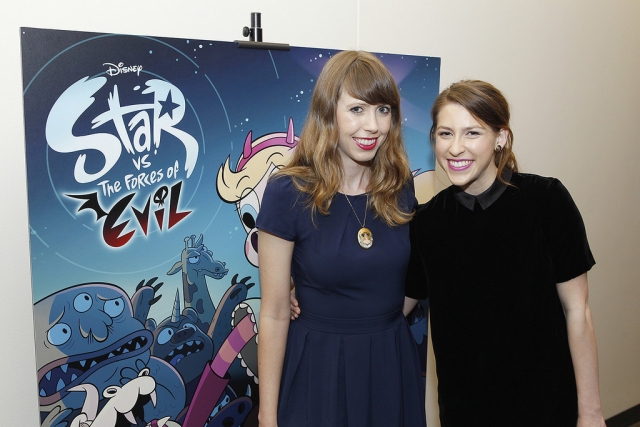 At the ‘Star vs. The Forces of Evil’ screening and panel discussion were show creator and executive producer Daron Nefcy and actor Eden Sher. | Photo: Disney XD/Rick Rowell

Nefcy said that Star began as a sketch and developed into something more during her third year at CalArts. She also said that Star was inspired by the Japanese manga/anime character Sailor Moon, whom she adored as a child. “I wanted to be Sailor Moon,” Nefcy said. The bubbly Sher, who’s also pulling TV double-duty starring as Sue Heck on ABC-TV’s The Middle, spoke about her fondness for the character: “Star is like me without a filter,” she said. Sher also thanked Nefcy for allowing her to “play” with the character, but Nefcy added, “The character has developed because of what Eden has brought to it.”

The panelists then took a macro look at the animation industry for women, with Burnett noting that CalArts has seen a surge of women applying to—and enrolled in—the Institute’s Character Animation Program over the past few years (The Fall 2014 semester’s breakdown was 71% female and 29% male). Keesling said, “I’m just stoked that there are more women in [animation.]”

Saval questioned how the recruitment of emerging talent has changed, and both Keesling and Salamone cited the rise of social media as tools to help discover new works and animators. Keesling said she’s partial to sites like Tumblr, which allows artists to showcase their work easily. Salamone also noted that events like CalArts Showcase screenings still provide a great way to screen new films.