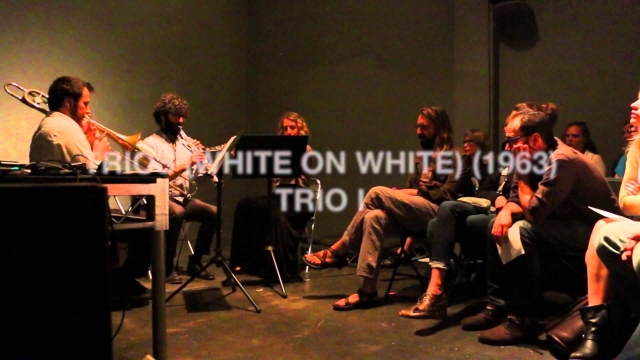 Above: A preview of pieces that the ensemble performed at Automata last year.

The L.A.-based experimental music collective, Southland Ensemble, presents a concert from the early oeuvre of experimental American composer Robert Ashley (1930-2014) on April 1 at REDCAT. The ensemble of all-CalArtian musicians takes the stage at 8:30 pm.

Ashley, who is best-known for his later operas and theatrical works, passed away last March. The 2014 Whitney Biennial featured three of the composer’s operas Vidas Perfectas, The Trial and Crash shortly after his passing.

Southland celebrates his seldom-performed works, which were written in the 1960s. More from REDCAT:

[The early] work [is] thought to be more conceptual than musical. The ensemble sets out  to demonstrate otherwise. Its program features the iconic pieces She  Was a Visitor (1967) and The Wolfman (1964) alongside lesser-known, though equally strong, titles such as Trios (White on White) (1963) and the  In memoriam… trilogy (1963).

The ensemble previously performed Ashley’s early works on June 8 of last year at the Chinatown art space, Automata, were the concert was reviewed by Isaac Schankler of NewMusicBox. Shankler describes the unique experience of the performance:

There was a palpable sense of energy in the room, which felt transformed into another world for the duration of the smartly staged, almost ceremonial performance. The ensemble chose to perform their selection of Ashley’s works continuously without a break, sometimes even simultaneously. Boundaries were blurred—not just between the pieces themselves, but also between music and theater, between audience and performer, between performance and life. This confusion could have been alienating, but in the hands of these committed players, it was instead bewitchingly mysterious.