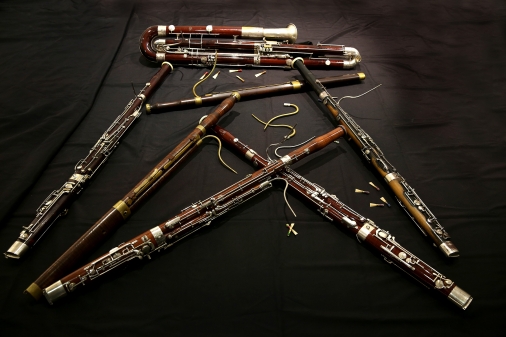 Above: Composer Michael Gordon’s trance piece for seven bassoons, ‘Rushes,’ is on the program.

Double-reed fans, rejoice! REDCAT is hosting a pair of concerts that celebrate the bassoon, featuring a variety of compositions and improvisations performed by CalArts alumni, faculty soloists and the CalArts Chamber Orchestra. The performances are at 4 pm and 7:30 pm on Sunday (April 12).

The program demonstrates the versatility of the bassoon as an instrument, including “some innovative, downright surprising uses.” More from REDCAT:

Feves premiered Newman’s bassoon concerto with the Long Beach Symphony Orchestra in 2007, and she currently serves as principle bassoonist with the ensemble. The piece is part of a larger five-movement work, with the other movements written specifically for clarinet, oboe, bassoon, flute and French Horn.

Gordon, who is a member of Bang on a Can music collective, wrote Rushes in 2012. The piece “brings out tonal and timbral aspects of the bassoon that are meant to induce a quasi-meditative, almost ecstatic state, in the listener as well as the performer.” The piece has its L.A. premiere during the 7:30 pm performance.

Above: The CalArts Chamber Orchestra performs at art/rock/orchestra!!! at the Wild Beast in 2012.