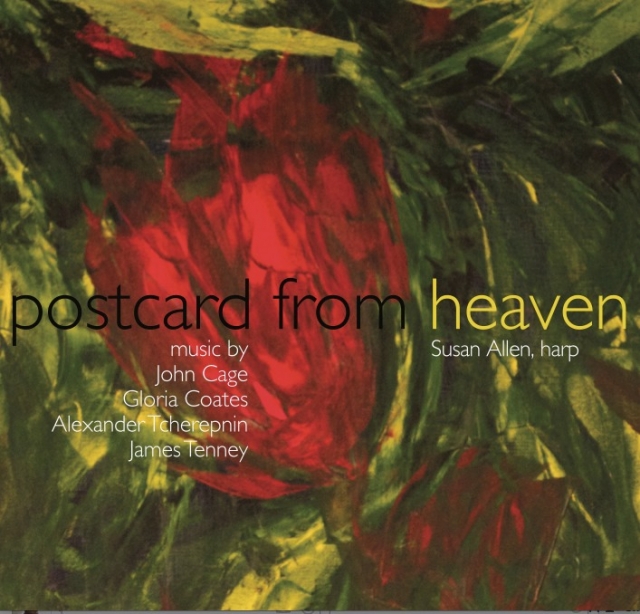 The album art for Susie Allen’s ‘Postcard From Heaven’

Harpist, Nicholas England Chair in Music at CalArts and Associate Dean for Academic Affairs Susie Allen releases a new recording today (April 7) on New World Records. Titled Postcard from Heaven, the album features new experimental works that focus on the harp. Allen and other musicians will perform a CD release party tonight (Tuesday) at 6 pm in B305A at CalArts.

More about the pieces on the album from Amazon:

[Cage wrote] In a Landscape in 1948. The work’s title is revealing: Cage places both sound and its hearing in an environment. Typical of Cage, his insight and his humor, the environment itself is left up to the choice of performer and/or listener, whether they realize it or not. There is no perspective imposed upon the music by composer or title, there is simply the fact of being in a landscape.

[Tenney’s] Harmonium No. 3 (1980) brings three harps together in an ensemble that deceives the ear, sounding like a single instrument. Tenney achieves this effect by writing a single line that crosses all three parts. The need for three harps is created by the piece’s unique tuning scheme.

[Coates’] score for Perchance to Dream (2014) is deceptively simple. Her use of triadic harmonies and diatonic melody is modified by altering the tuning of the harp and the bowing of the vibraphone. These key characteristics create the piece’s hallmark otherworldly quality.

Postcard From Heaven (1992), for one to 20 harps, was one of Cage’s last works. The work consists of a collection of “ragas” (predetermined scale patterns featuring set pedal configurations for the harp), that the performers are free to choose how many and in which order they wish to play. Performers are instructed to begin and end the piece using e-bows, a magnetic device that causes steels strings to vibrate without being plucked. The e-bow creates a soft, sustained tone one would rather expect for a postcard from a destination such as heaven.

The project was recorded at The Herb Alpert School of Music’s Dizzy Gillespie Digital Recording Studio at CalArts by David J. Paha (Music MFA 14), who is pictured below setting up microphones. 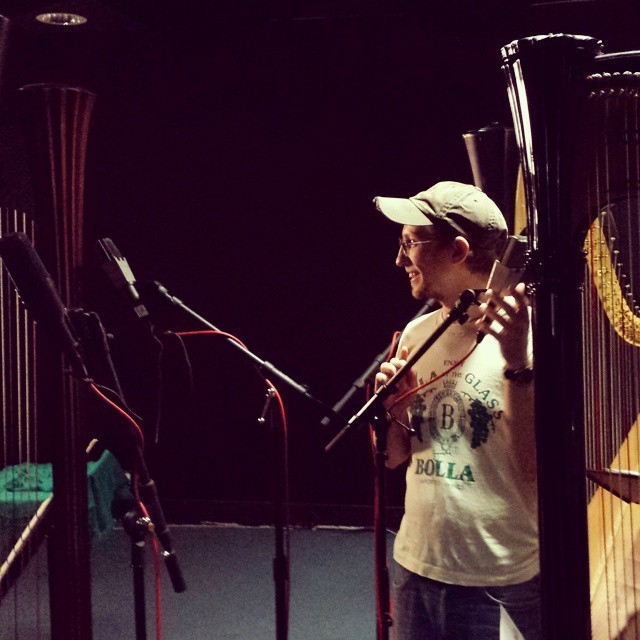