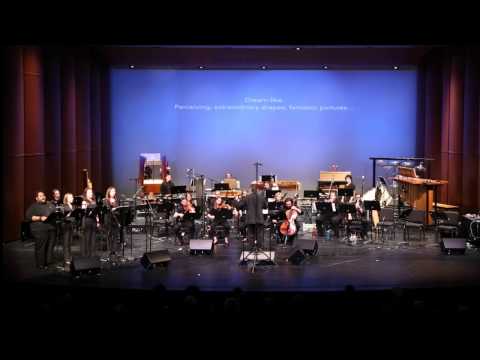 Above: ‘Bicycle Day’ scene excerpt from LSD: The Opera by Anne LeBaron, performed by The Industry and Wild Up.

Among the program’s offerings are performances by conceptual artist and long-time School of Art faculty member Charles Gaines and harpist, composer and faculty member in The Herb Alpert School of Music at CalArts Anne LeBaron.

Gaines performs Declaration of the Rights of Women from his synesthetic project Manifestos 2. For the project, Gaines translated language from four manifestos into musical notation by substituting each letter in the manifesto with its corresponding musical note (C, D, E, F, G, A, B) and treating each letter without an equivalent note as a silent musical rest.

His performance work is based on the 1791 speech by French activist and playwright Olympe De Gouges. The manifesto, dedicated to Marie Antoinette and modeled after the Declaration of the Rights of Man and of the Citizen (which was adopted by the French Revolution), exposes how the revolution has failed because it was unsuccessful in bringing about gender equality.

Gaines’ Declaration of the Rights of Women is arranged by Opera Povera director Sean Griffin and performed by numerous CalArtians among the Isaura String Quartet and the Grammy-winning Partch Ensemble.

The scene is scored for an ensemble of instruments built by composer Harry Partch. The Partch players double as a chorus, intoning the parts of Mellon family fortune heirs Peggy, Billy and Tommy Hitchcock, who provided Leary with a mansion in Poughkeepsie, New York, to use as a home base for his experiments.

Opera Povera at the Schindler House