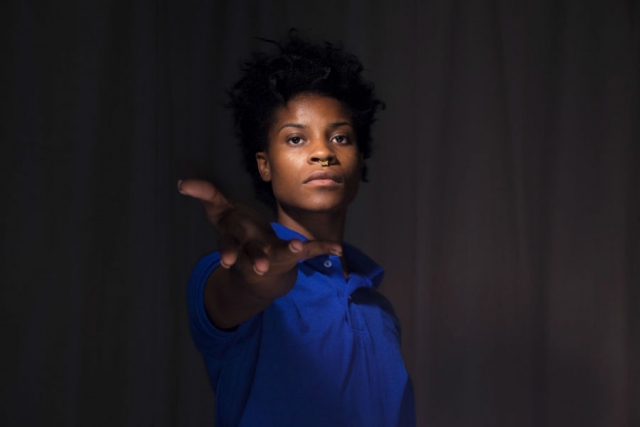 The multimedia piece ‘Wages’ will be performed during intermission of this week’s Spring Dance Concert. (Image: André Daughtry)

Wages, a multidisciplinary piece conceived by CalArts students Sara Steward (Dance BFA 17) and André Daughtry (Art MFA 15), will be performed during the intermission of the Spring Dance Concert on April 16-17 and streamed live to monitors in The Sharon Disney Lund Theater lobby at CalArts. The event will also be broadcast on Ustream so people have the option to watch Wages from their smartphones or computers as well.

Daughtry describes the multimedia collaboration (among several students and faculty from the schools of Dance, Film/Video, Theater and Art) as a “creative response and interjection into the conversation” around the spate of killings of young black men that has earned much media scrutiny during the past few years.

From the performance notes:

There are two major themes that serve as the conceptual setup for this piece. The first concept is an investigation into the dynamics between dominant and minority cultural relations in this country. According to Judith Butler, there is a tension between “performativity and precarity” in social settings. Ms. Butler is speaking specifically of the performativity of a body that moves, talks, reacts, engages in activities and displaces itself in time and space in a way that may not be in congruence with the dominant culture that surrounds it. The “precarity” in this context includes all the means to harass, control, guide and redirect the bodily movements (performativity) of those minority bodies.

The second concept engages the conversation about the variety of images that are now available for us to view these instances where the performativity of one person comes into clash with the precarity present in society. When we speak of a variety of images we mean the moving images that can come from different sources like surveillance cameras, hand-held consumer camera footage that is uploaded to sites like YouTube or more “official” sources like televised news.

The performance will be filmed live from the CalArts video studio (C115) at approximately 8:40 pm (times will vary due to the Spring Dance Concert pieces) on Thursday and Friday. To watch Wages, please visit the Ustream channel.