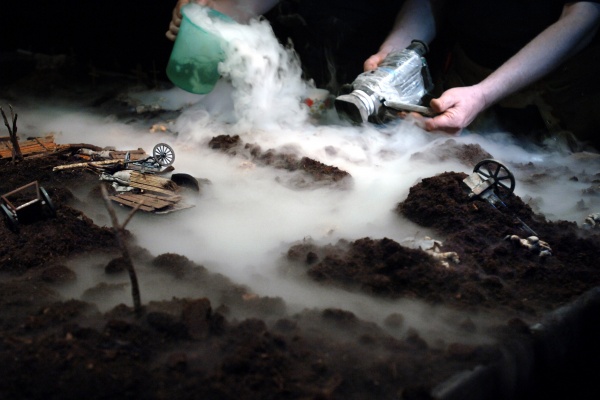 Above: The promotional video for Hotel Modern’s The Great War.

Using dollhouse-scale props, sawdust, soil, rusty nails and parsley “trees,” Hotel Modern recreates WWI’s Western Front in miniature while foley artist and composer Arthur Sauer provides the companion sounds (a rap on the table is the sound of an exploding hand grenade and a match strike is the sound of mustard gas escaping).

Video cameras project the action onto an overhead screen, resulting in a “live animation” performance that gives the harrowing realities of war a certain tangibility. Adding more emotional heft is a voiceover in which a woman recites text adapted from actual letters written by trench soldiers.

The Great War has toured in cities across Europe, Russia, Singapore, Hong Kong, China, Egypt, Canada and the United States to critical acclaim.

From Twin Cities Daily Planet’s review of The Great War during its 2010 run at The Walker Art Center:

What’s most special about Hotel Modern’s approach is that a technique that logically should pull you out of the story, should make it harder to suspend your disbelief and focus on the men in the mud nearly 100 years ago, instead sharpens the focus of the story being told and serves to make that story even more absorbing.