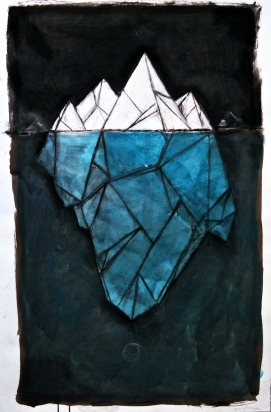 Thompson’s icebergs started out as smaller scale sketches and drawings, which became larger full-colored pieces done between 2014 and 2015. The structure of the iceberg lends itself as a metaphor frequently used in different fields from psychoanalysis to cultural studies. The sharp angles of the icebergs are reminiscent of the facets on a cut jewel.

Thompson is the co-founder, along with CalArts alumnus Harry McGowan (Art BFA 05), of the design and motion firm Brainbow. He is also a member of alumni art collective, The Stuff.

Icebergs runs through May 15. A limited-edition publication titled Icebergs—Jimmy Thompson will also be available for purchase at the exhibit.