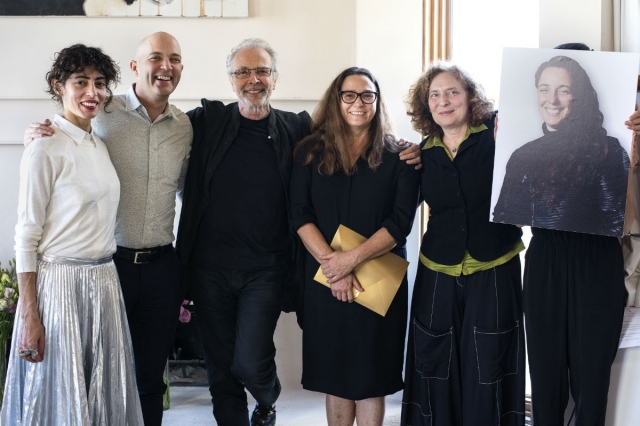 At the Herb Alpert Award in the Arts luncheon on May 1, from left: Maria Hassabi, Taylor Mac, Herb Alpert, Sharon Lockhart, Julia Wolfe and Tania Bruguera, who was unable to attend as she was detained in Cuba.

At a luncheon hosted by the Herb Alpert Foundation in Santa Monica last Friday, the foundation and CalArts awarded the 21st Annual Herb Alpert Award in the Arts to five exceptional mid-career artists. Maria Hassabi, Sharon Lockhart, Julia Wolfe (winner of this year’s Pulitzer Prize in Music), Taylor Mac and Tania Bruguera were selected on the basis of past performance as well as their future potential in the fields of Dance, Film/Video, Music, Theatre and the Visual Arts, respectively. The four awardees in attendance thanked music icon and philanthropist Herb Alpert and his foundation for their unwavering commitment to the arts.

Unable to attend the ceremony for political reasons, however, was Cuban artist Bruguera. Noted The Hollywood Reporter: “[Bruguera] has repeatedly been detained this year in her native Cuba and is currently prohibited from leaving the country, due to the provocative nature of her performance art.”

Irene Borger, director of the Herb Alpert Award in the Arts, discussed why the 2015 winners were chosen:

Dance: Maria Hassabi, for changing the nature of spectatorship, for challenging conventional ideas about performance, for stripping away busyness and the ornamentation of dancing to allow for rare contemplative experience.

Film/Video: Sharon Lockhart, for her films which combine structural rigor, formal exactitude, exquisite beauty, intimate attention, commitment to a cinema of duration, and a sympathetic ethnographic eye in a post–minimalist aesthetic entirely her own.

Music: Julia Wolfe, for her fresh, uncompromising artistry, her vibrant, direct, and emotionally powerful works generous and bold in spirit and her engagement with socially conscious issues, a tradition that is passionately and unapologetically American to the core.

Visual Arts: Tania Bruguera, for the complexity, longevity, and urgency of her work, for her strong formal clarity and ongoing contribution to international conversations on freedom of speech and illegal immigration. The panel honors her for her commitment to resisting market pressures in order to seek an ethics of what art can do, and recognize the innovative ways she has reinvented the language of activism within contemporary culture.

“It’s exciting to be able to support these five unique artists who are always on the hunt for something they don’t yet know, something real that touches us in a deep place. Whether they are writing a concerto, making a film, an installation, a ruckus or a dance, they always look for something special and original to say,” Alpert said of the awardees. “These are artists with the passion, talent and the restlessness that never makes them stop. They HAVE TO make art not just for themselves… but for all of US.”

The recipient in each genre receives a prize of $75,000. CalArts, who has administered the award since its inception, will host each of the artists during the 2015-16 school year.

“Nothing is more precious for artists than the gift of time to dive deeply into their work,” said CalArts President Steven D. Lavine. “But art is also almost always about generosity and sharing. The Herb Alpert Awards generously underwrite that creative time as well as the weeklong residency that each artist does at CalArts, allowing the Herb Alpert recipients to share generously with the next generation of art makers.”