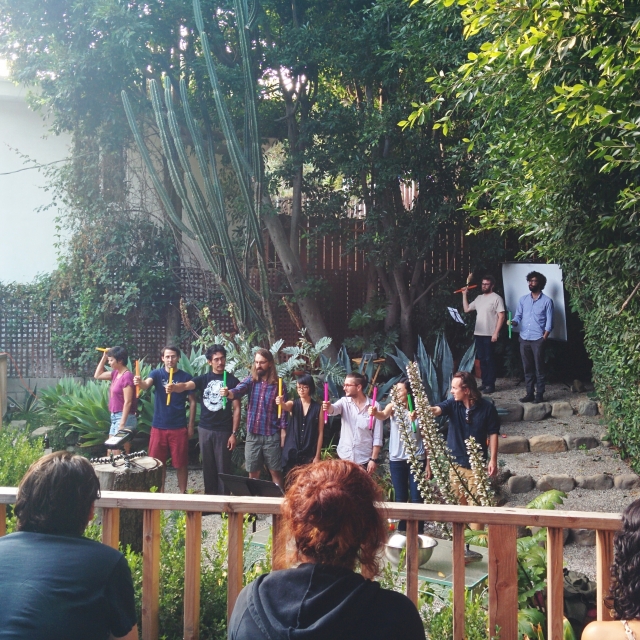 Formed in 2005 by composer and CalArts faculty Michael Pisaro, Dog Star Orchestra and its namesake music series returns to Los Angeles for an 11th year from May 16 to June 2. The orchestra’s summer festival, which is co-directed by Pisaro, Colin Wambsgans (Music MFA 11) and James Klopfleisch (Music MFA 10), is designed to introduce Los Angeles-area audiences to recent and lesser-known experimental music.

This year, multiple curators present 16 concerts with programs that explore the boundaries and contours of music, sound and occasionally geography. Six of the concerts will be held in The Wild Beast at CalArts, including a tribute to the late composer and CalArts faculty, Mark Trayle, on May 19, with performances of his work by his former students, as well as a concert on May 24 that features a large ensemble with new works by Scott Cazan (Music MFA 09), Nomi Epstein, Klopfleisch and Wambsgans.

Four international musicians are participating in the festival. In addition to Haraldsdottir, who is from Iceland, pianist Reinier van Houdt from Rotterdam and performs a new work of Pisaro’s; bassoonist Dafne Vicente-Sandoval from Paris, plays the American premiere of Eliane Radigue’s Occam XIII; and pianist Jeromos Kamphuis from the Netherlands, performs on two concerts during the series.

The Dog Star 11 website has detailed information about all concerts and locations. All events are free unless otherwise noted.

May 16-June 2
Visit the Dog Star Orchestra site for concert times and locations
Tickets: Free or $5