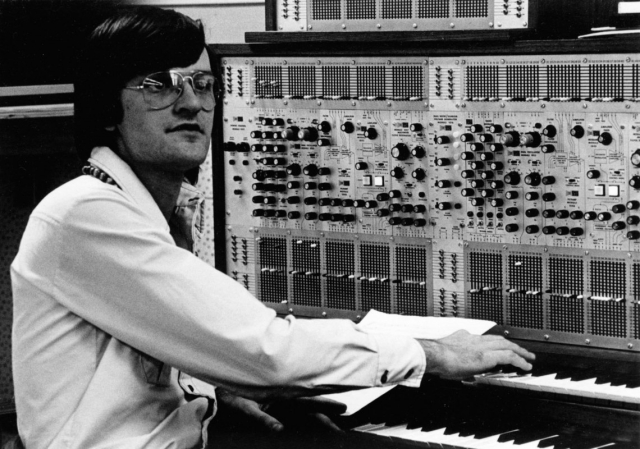 David Rosenboom at the Electronic Media Studios of York University, Toronto in the early 1970s. | Image: Courtesy the artist.

In conjunction with America is Hard to See, the inaugural exhibition in the Whitney Museum of American Art’s new Manhattan home, the museum has curated a number of events and performances in its new theater, including this weekend’s David Rosenboom: Propositional Music.

Presented by ISSUE Project Room in collaboration with the Whitney, the three-day concert series celebrates 50 years of groundbreaking work by Rosenboom, a noted composer, performer and dean of The Herb Alpert School of Music at CalArts.

As the series title suggests, his disparate artistic practice is connected by a relentless inquisitive nature, which has often placed Rosenboom outside the narratives of avant­garde composition, Minimalism, and free ­improvisation, though he has fundamentally contributed to and collaborated with these artistic communities. His work distinguishes itself by drawing from scientific, artistic, social, and cosmological thought, gleaning the potentials for music to apply and advance interdisciplinary organizing principles and research in revealing the collective knowledge that connects us to our universe.

The concerts begin on Friday (May 22) with Zones of Influence, followed on Saturday by the public demonstration Advanced Brain­-Computer Interfacing in the Arts , and an evening concert Ringing Minds and Choose Your Universe. The series wraps on Sunday with Continental Divide and How Much Better If Plymouth Rock Had Landed On The Pilgrims, which includes a screening of a film that Selwood created for Rosenboom’s latter composition.

Continental Divide and How Much Better If Plymouth Rock Had Landed On The Pilgrims
Sunday, May 24
8–10 pm
Tickets required