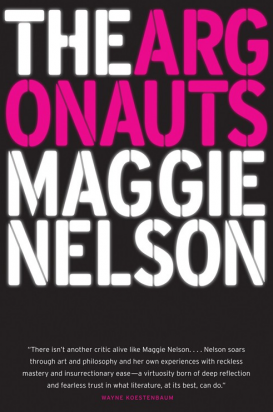 To say that Critical Studies faculty member Maggie Nelson and her just-released book The Argonauts are earning critical accolades would be a bit of an understatement. Look no further than the April 26 lede of a review from The Guardian (UK) newspaper:

Let’s start with an introduction. Maggie Nelson is one of the most electrifying writers at work in America today, among the sharpest and most supple thinkers of her generation. Born in 1973, she has so far produced nine books, four of poetry and five of non-fiction, knitting together what might in heavier hands be abstruse theory and humid confession to create an exhilarating new language for considering both the messiness of life and the meanings of art.

There are several other high-profile reviews that run along the same lines for the book, which was published in wide release by the independent Graywolf Press on May 6.

The book, a work of “autotheory,” examines the modern definitions of love and language through the lens of Nelson’s relationship with fluidly gendered interdisciplinary artist (and CalArts School of Art faculty member) Harry Dodge. From The New Yorker review (May 25):

Her book—part memoir, part critical inquiry touching on desire, love, and family—is a superb exploration of the risk and the excitement of change. Thinking and feeling are, for Nelson, mutually necessary processes; the result is an exceptional portrait both of a romantic partnership and of the collaboration between Nelson’s mind and heart.

Nelson’s last book The Art of Cruelty, was named a 2011 Notable Book of the Year by The New York Times; Jane: A Murder (2005) was a finalist for the PEN/Martha Albrand Award for the Art of Memoir). Other notable awards include a 2010 Guggenheim Fellowship in Nonfiction, a 2011 National Endowment for the Arts Fellowship in Poetry and a 2013 Innovative Literature grant from Creative Capital.