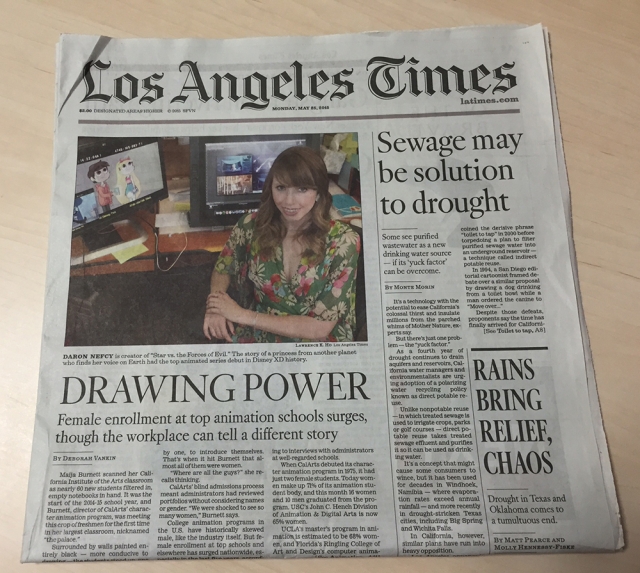 On May 25, the Los Angeles Times ran a feature on the state of women in animation with a focus on CalArts’ Character Animation Program. The detailed article, titled “Animation: At CalArts and elsewhere, more women are entering the picture” points out the growing number of women enrolling into, and graduating from, top animation schools all over the US and how that trend could affect the animation industry, which is still dominated by men.

The article states that while the first class of CalArts animators in 1975 included only two women, 71 percent of students in the program this year are women. Comparable enrollment numbers can also be seen at other schools such as Ringling College of Art and Design in Florida and University of California, Los Angeles (UCLA).

The uptick in female enrollment could be attributed to the fact that more women are pursuing college degrees in general. Other factors cited include new animated films depicting strong female characters such as the Oscar Award-winning Frozen, directed by CalArts alumnus and former faculty Chris Buck (Film/Video 78) and Jennifer Lee; and Brave, directed by alumni Mark Andrews (Film/Video BFA 93) and Brenda Chapman (Film/Video BFA 87).

More from the Los Angeles Times:

“People can share their artwork on Tumblr and Vimeo and YouTube and DeviantArt,” she says, “and see that it’s actually a thing that a lot of people are interested in, not just men.”

While the Times found that only 21 percent of women were employed under an Animation Guild contract this year, the article does end on an optimistic note:

Animation Guild representative Steve Hulett believes that it’s just a matter of time—and gumption—before things even out in the industry among men and women.

“With so many women coming out of these schools, a lot of these graduates, if they’ve got the skill sets, will find their way into the business,” he says.