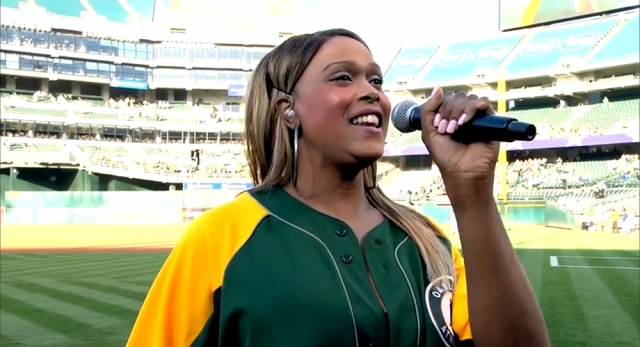 Sinclairé, a soprano singer with a 4 1/2 octave range, opened the Oakland Athletics’ match against the San Diego Padres in Oakland Coliseum with her rendition of The Star-Spangled Banner.

“I never thought I’d be here,” she said to the San Francisco Chronicle. “I’m trying to calm my nerves with meditation, but every time I see that jersey Michael (her boyfriend) got me to wear to the game, it reminds me I’m going to be singing for 30,000-whatever people. The biggest audience I’ve had before is 1,000, so you see where the nerves come from.”

Out Magazine writes about Sinclairé’s journey:

Her first experience singing was with her Baptist church’s choir, where she was handed solo after solo. Despite her physical development as a boy, her voice never really changed, remaining clear and angelically high. With her grandmother’s help, she studied with vocal coaches and enrolled at the Baltimore School of the Arts.

As she embraced her voice, she struggled with her gender identity. It wasn’t until she moved out of Baltimore that she began to embrace that too. “When I left my family, I discovered myself,” she says. At a small conservative Christian college in Canada, Breanna the woman began to emerge but was not embraced by her peers. Unable to continue her journey there, Sinclairé soon left. Disowned by her family, she spent several months homeless in New York City. But music was her North Star, and she followed it to the prestigious CalArts, where she earned her BFA. and where, in her senior year, she began to transition. The process is arduous for any person, but for Sinclairé, transitioning played particular and unpredictable havoc on her voice. “With hormone therapy, I had to adjust,” she says. “Your body goes through drastic changes. My voice teacher said, ‘you have to plow through it.’ If I didn’t keep practicing, I wouldn’t be able to sing today.”

She has since earned a masters degree from the San Francisco Conservatory of Music, becoming the first trans person awarded the degree by the institution.

Above: Breanna Sinclairé sings at a wedding in 2014.