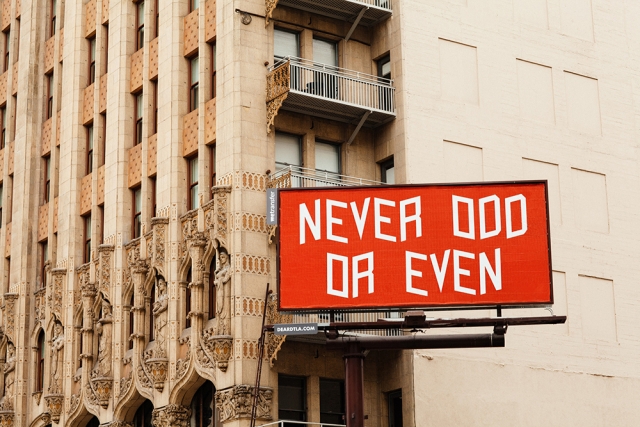 The content-sharing company WeTransfer is taking its work off the internet and into the real world through a partnership with the Ace Hotel in Downtown Los Angeles. The project, called Dear DTLA, features various artists’ works taking over the billboard next to the hotel’s historic Spanish Gothic building.

“We’ve always seen the billboard as a megaphone to the city,” said Ace Hotel partner Kelly Sawdon in a recent Los Angeles Times article. “It’s an opportunity to broadcast something out of the ordinary, connective, weird, heady or idealistic.”

This month through early August, the billboard features work by graphic designer and CalArts alumnus Brian Roettinger (Art BFA 04). The work, an 11 x 23-foot canvas of candy-red with white blocky letters spelling out “Never Odd Or Even,” can be read by walkers on the sidewalk or backwards from a car’s rear-view mirror as drivers zoom past Broadway.

“Billboards in Los Angeles—not all but most—are either selling products or advertising movies,” Roettinger told the LA Times. “So the excitement here was making a billboard that wasn’t meant to sell anything other than an idea. Originally I wanted the billboard to say, ‘Nothing is for sale!'”

Roettinger is a Los Angeles-based artist and art director. He has designed album covers for artists such as Jay-Z, Childish Gambino, St. Vincent and Florence + The Machine. He has also worked on the stage design for DJ Mark Ronson’s live shows.