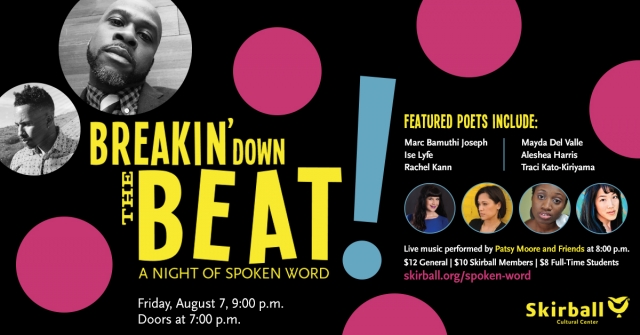 Promotional poster for ‘Breakin’ Down the Beat.’

Tomorrow (Aug. 7), the Skirball Cultural Center presents Breakin’ Down the Beat: A Night of Spoken Word. The program, produced by Elena Muslar (Theater MFA 14), pays homage to the Beat Generation—the literary movement that brought us the writers Jack Kerouac, Allen Ginsberg and Gary Snyder, among others—by showcasing the work of a new generation of poets.

The lyrical performances of these acclaimed poets reveal the intersections between text, song, movement, and media. Questioning social consciousness, ringing voices of justice, and promoting cultural awareness in their communities, this eclectic group demonstrates the visceral power of poetry.

Breakin’ Down the Beat begins at 8 pm with a musical performance by Patsy Moore and Friends.

Breakin' Down the Beat: A Night of Spoken Word