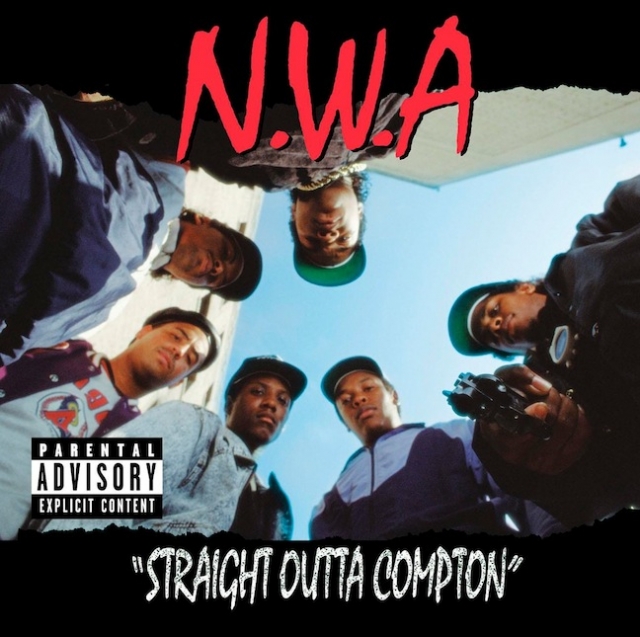 Straight Outta Compton, the dramatic feature that chronicles the rise of the rap group N.W.A. and the lives and struggles of its members (Kim “Arabian Prince” Renard Nazel, Eric “Eazy-E” Wright, Andre “Dr. Dre” Young, O’Shea “Ice Cube” Jackson, Lorenzo ‘”MC Ren” Patterson and Antoine “DJ Yella” Carraby) rose to the top of the box office this past weekend, debuting at $60.2 million. The biopic borrows its name from N.W.A.’s 1998 debut studio album, which is considered one of the best albums of all time. Pitchfork gave it a 9.7 rating (out of 10); and Rolling Stone ranked it among the “500 Greatest Albums of All Time,” coming in at no. 144.

The record’s album art has proven to be just as iconic: The six members of the group stare from above into the camera lens as Eazy-E points a gun directly at the camera. The unforgettable image was made by photographer and CalArts alumnus Eric Poppleton (Art MFA 86). In a recent interview with CNN about the photograph, Poppleton talked about working as a freelancer just after grad school at CalArts and working with a friend and art director Kevin Hosmann on the N.W.A. gig. They followed the group around Downtown Los Angeles, experimenting with different shots on the fly, angles and natural lighting. Little did Poppleton know that this shoot would create a picture to symbolize the “gangsta rap” movement. From CNN:

“In hindsight, it was just so provocative. You’re taking the perspective of someone who is about to be killed essentially. Not that they were going to do that to me,” Poppleton says. “We don’t even print that stuff in newspapers. Even at CNN, would you print an image like that?

“So how could we even propose this as an album cover?”

Still, he described the double-platinum album as a perfect blend of music and photography.

Here you had this controversial new group that “inspired a generation of listeners to a new level,” Poppleton says. “Equally important in this case is the original album artwork. The ‘Straight Outta Compton’ album cover art summed up the album’s lyrics at the time. I’m not sure this type of imagery would be so widely accepted or presented in today’s commercial marketplace.

“Back then, it was more free rein.”

Poppleton would shoot four more covers for N.W.A. before focusing his career on creating still imagery and video for sports documentary adventures. Currently the director of photography of epop media, Poppleton was in Nepal earlier this year when the earthquake struck, and CNN documented his journey to bring home the body of his best friend and fellow CalArts alumnus, filmmaker Tom Taplin (Film/Video MFA 79), who was killed at Everest Base Camp during the quake.