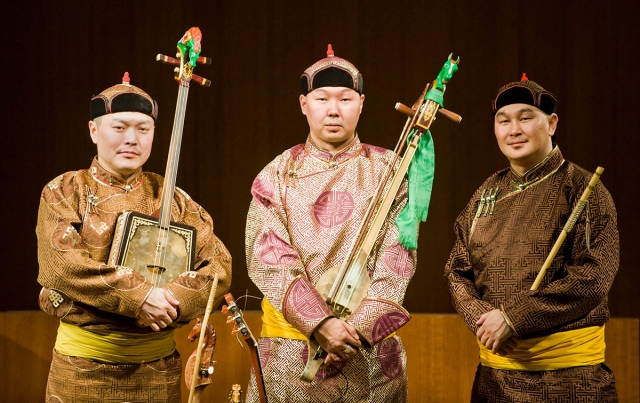 On Saturday (Sept. 19), The Herb Alpert School of Music at CalArts opens this year’s Wild Beast Concert Series with an evening of Tuvan throat singing by Alash Ensemble. Composed of Bady-Dorzhu Ondar, Ayan-ool Sam and Ayan Shirizhik, internationally renowned practitioners of the Inner Asian art, the ensemble is currently on a Fall/Winter tour of the United States.

While Western musicians seek to produce a pure focused tone, Tuvans break tones into a spray of sounds and textures. Newsweek once described a traditional Tuvan singer as, “a person who could sing a sustained low note while humming an eerie, whistle-like melody. For good measure, toss in a thrumming rhythm similar to that of a jaw harp, but produced vocally by the same person, at the same time.”

Alash Ensemble members also play a variety of Tuvan traditional instruments native to their tiny republic in Central Asia and have collaborated with Bela Fleck and the Flecktones, beatboxer Shodekeh and American classical musicians.

Above: Alash Ensemble performing ‘My Throat’ in Chicago.