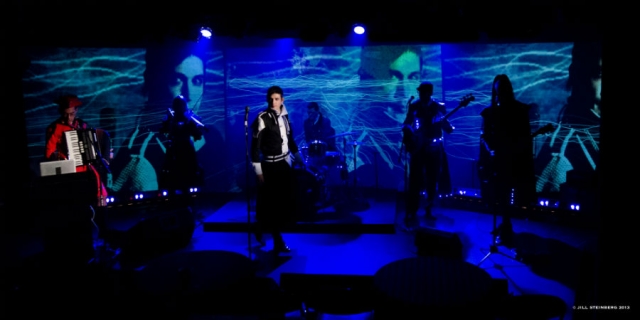 Timur and the Dime Museum perform at BAM in New York this weekend. | Image: Courtesy of the artist

As part of this weekend’s BAM Next Wave Festival in Brooklyn, New York, the Los Angeles-based Timur and the Dime Museum performs Collapse, a post-ecological requiem for the natural world, which humanity has scarred in its pursuit of progress. The band is led by Kazakh-American tenor Timur Bekbosunov, a CalArts alumnus (Music MFA 08) and a faculty member of The Herb Alpert School of Music at CalArts.

The music and text for the piece was composed by Dime Museum band member and fellow CalArts alumnus Daniel Corral (Music MFA 07) and outlines a story of the impermanence of humanity’s ecological supremacy with music encompassing a range of punk, pop, grunge and operatic aesthetics. Other CalArts alumni round out the band, including Andrew Lessman (Music BFA 09) on drums, Matthew Setzer (Music MFA 08) on electric guitar and David Tranchina (Music MFA 08) on electric bass.

Bekbosunov, a noted interpreter of contemporary opera in the United States and Europe, has made solo appearances with the Los Angeles Philharmonic, Bang on a Can All-Stars and The Industry LA, among many other groups. BAM describes him, with the Dime Museum, as “the magnetically transgressive officiant of this perverse postmodern mass for a planet in crisis.”

Collapse has its New York premiere on Thursday at 7:30 pm with additional performances on Friday and Saturday (Sept. 17-19). Tickets are on sale at the BAM website for $25.

Video: Timur and the Dime Museum playing ‘Collapse’ at REDCAT.

Timur and the Dime Museum: Collapse