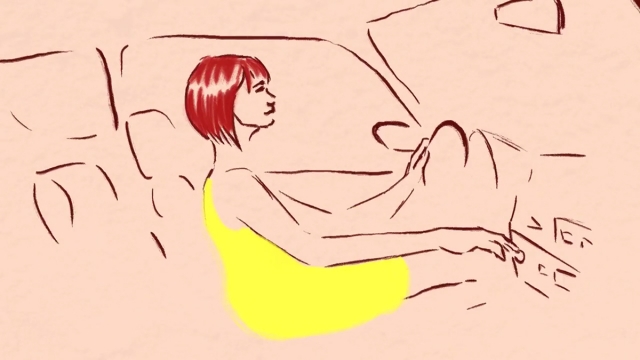 After the success of The Industry’s Invisible Cities, a 2013 site-specific work which staged Italo Calvino’s eponymous 1972 novel at the iconic Los Angeles Union Station, the experimental opera company takes their new production to where a lot of Angelenos spend their time: in traffic.

In Hopscotch, audience members ride in one of 24 cars and meet Lucha, Jameson and Orlando, three individuals who meet and grow old in Los Angeles, in a story loosely based on the Greek myth of Orpheus and Eurydice. Three routes have been planned for Hopscotch, each with their own self-contained, but interconnected, narrative.

The riders in Hopscotch have no idea where they are going and could find themselves driving around with musicians and actors, and watching key points of the story unfold at certain intersections and sidewalks throughout the city.

The opera is filmed live and may be watched at a 180-person Central Hub in the parking lot of Southern California Institute of Architecture (SCI-Arc). Twenty-four screens will simultaneously stream the opera and each audience member may focus on any of the streams using the German audio company Sennheiser’s Momentum headphones and innovative Guideport technology.

Above: Promotional video for ‘Hopscotch.’

Beyond the music and the story, Yuval Sharon, The Industry’s artistic director, wants Hopscotch to also be about how Angelenos see their city. “Sometimes it’s about the car, sometimes it’s about the journey,” he says in a Los Angeles Times article. “It’s about how to go beyond the isolation of individual car rides and about noticing our city streets as we shuttle to our destinations.”

Additionally, The Industry has partnered with Los Angeles animators to animate some of the chapters in the Hopscotch story, one of which is the featured video above. Ticket buyers also receive Hopscotch the book, which contains excerpts and synopses from the full opera, art, an interview with Sharon and an essay by David Ulin, The Los Angeles Times’ book critic.

Previews for Hopscotch start this Sunday (Oct. 4), with regular performances starting on the weekends of Oct. 31 through Nov. 15. Three performances are scheduled per day.

Below is the first part of a two-part series about “How to Hopscotch.”

Read more about Hopscotch in this article from California Sunday Magazine.

Hopscotch: A Mobile Opera for 24 Cars