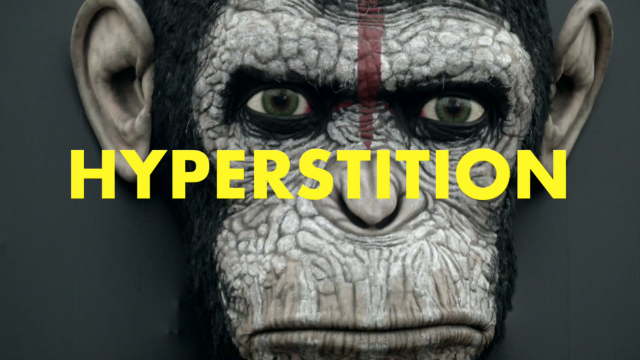 Armen Avanessian, a noted Berlin-based writer and philosopher, serves as this year’s visiting faculty member for the Aesthetics & Politics (A&P) program at CalArts.

Traditionally, A&P visiting faculty are scholars and/or artists who work in areas not currently covered in the program’s curriculum. This week, Avanessian begins his course, Thinking from the Future with the screening of a philosophical film, Hyperstition, which he just finished together with Christopher Roth. In essence, the concept of “hyperstition” examines fictional entities that become real—akin to self-fulfilling prophecies. To what extent are we today obliged to think (about) time not just in a non-linear way, but contrary to chronological conceptions of time? And what could it mean to look back from the future into the present?

Hyperstition is a film “on time and narrative. Of thoughts and images. On plants and the outside. Abduction and Recursion. Yoctoseconds and Platonia. Plots and anaerobic organisms. About the movement of thinking and philosophy in anthropology, art, design, economy, linguistics, mathematics, and politics. And back into abstraction.”

A student of philosophy and political science in Vienna and in Paris with Jacques Rancière, Avanessian completed his dissertation in literature on Phenomenology of the Ironic Spirit: Ethics, Poetics, and Politics of Modernity. After working as a freelance journalist and editor (at Le Philosophoire), he returned to academia in 2007 as a researcher at the Collaborative Research Center 626: Aesthetic Experience and the Dissolution of Artistic Limits and at the Peter Szondi Institute for Comparative Literature at Free University Berlin. In 2012, he founded a bilingual research platform on Speculative Poetics, which produces a series of events, translations and publications.

Now at CalArts for the fall term, Avanessian’s class is poised to investigate key movements and concepts in contemporary philosophy, politics and art theory, including speculative realism, accelerationism, materialism, chaos, nihilism and others.

The CalArts community is welcome to attend the first meeting of the course, held on Wednesday (Oct. 7) from 6-9 pm in Butler Building 4, as Avanessian presents the U.S. premiere screening of Hyperstition.