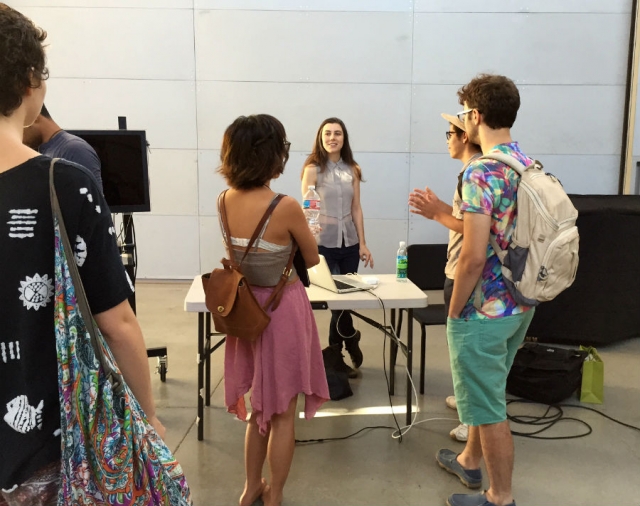 The noted singer-songwriter, composer and CalArts alumna Julia Shammas Holter (Music/IM MFA 09) returned to campus on Sept. 28 as a visiting lecturer in the VoiceArts Forum. Students packed The Wild Beast for the lecture and listening session, in which Holter talked about her musical background, a DIY aesthetic and her influences. She also stayed to answer a number of questions about the music business with students after the class ended.

In just a few short years, Holter has earned legitimate indie music cred from critics and audiences alike. She released her first studio album Tragedy in 2011, followed by Ekstasis in 2012 and Loud City Song the following year, all to much acclaim. Last month, Holter released her latest album, Have You In My Wilderness, on Domino records, which Pitchfork described as “transcendent.” Holter, who studied classical piano and composition as an undergrad at the University of Michigan, has collaborated with an eclectic range of musicians from the artist-composer Nite Jewel and psychedelic folk singer Linda Perhacs to composer and CalArts faculty member Michael Pisaro.

Holter, a self-described introvert (“I love [recording] party sounds…more than going to parties”), talked about lacking the confidence in her lyrics and her voice when she started recording on her own. “I was very scared of my voice, so I would pitch my voice up and down a lot.” She played a recording of her song “50 Bunny Rabbits” as an example of pitching down to mask her voice.

Of all her albums to date, Holter points to Tragedy (based on a Euripides’ Greek tragedy Hippolytus) as the “best representation of what I like to do in music, overall.” During the listening session at CalArts, she played a few tracks from the album, including “Finale.”

The forum allowed Holter to cover her varied musical influences, which include Joni Mitchell’s 1974 album Court and Spark, Brian Ferry’s (Roxy Music) “very romantic” vibrato, Cocteau Twins’ “Fluffy Tufts” and fellow CalArtian Ariel Pink. “I love the way Ariel brings all these different voices together,” she said. “Having tons of layers and voices is something that I love.” She also played clips from Robert Wyatt’s cover of “Experiences #2” by John Cage as well as Cage’s own 1979 Circus On recording.

One of the highlights in Holter’s musical studies was an introduction to Robert Ashley’s “Automatic Writing” in Sara Roberts class at CalArts. The early ambient recording, Holter said, was an example of “why music is so exciting.” The song features whispering and involuntary speech, and the first-time listener isn’t quite sure what’s happening, she said. “Mystery is essential in all music.”

Holter said that CalArts encourages people to find their own paths when it comes to making music, as a sort of proving ground. While she said she didn’t know any secret formula for working with music labels and industry execs, her career advice for CalArts students was refreshingly simple: “Keep doing what you want to do—really adamantly.”

Holter is currently on tour in support of Have You In My Wilderness.