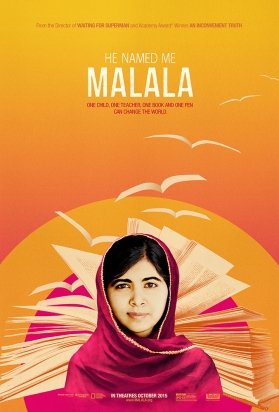 The documentary ‘He Named Me Malala’ featured the work of a number of CalArts’ animators. (Image: Fox Searchlight)

Oscar-winning documentarian Davis Guggenheim used a team of CalArts animators for his latest live-action feature, He Named Me Malala, an intimate portrait of activist Malala Yousafzai.

In 2012, 15-year-old Malala was shot in the head by a Taliban militiaman, sparking international outrage. Yousafzai has since emerged as a leading campaigner for the rights of girls worldwide and in 2014 became the youngest-ever Nobel Peace Prize Laureate.

The team created an impressionistic, painterly visual universe to depict the animated scenes, which were inspired by influences ranging from the paintings of Henri Matisse and David Hockney to South Asian textiles.

“It’s a hard-hitting story,” noted Carpenter, “and animation helps it to be taken in and understood by a wide range of viewers.”

He Named Me Malala opened on Oct. 2 and is currently playing in theaters nationwide.

In addition to Carpenter and Kotlarz, credited CalArtians include:

Director Davis Guggenheim talks why animation was needed for ‘He Named Me Malala.’