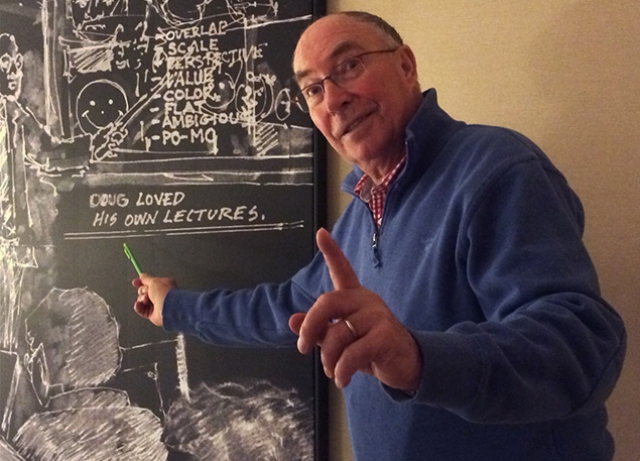 CalArts MA in Aesthetics & Politics (A&P) Program has named Thierry de Duve the Fall 2015 Theorist in Residence. The residency program is an initiative in which media, urban or global studies scholars spend up to two weeks at CalArts to teach workshops, faculty seminars and present public lectures.

De Duve, a Belgian philosopher, art historian and critic, is a professor emeritus at the University of Lille 3, a distinguished lecturer at Hunter College, New York, and was Kirk Varnedoe visiting professor at the Institute of Fine Arts, New York. His publications in English include Pictorial Nominalism and Kant After Duchamp, the latter being a series of essays that examines the artistry of Marcel Duchamp’s readymades and how Duchamp, according to publisher MIT Press, “made the logic of modernist art practice the subject matter of his work, a shift in aesthetic judgment that replaced the classical ‘this is beautiful’ with ‘this is art.'” De Duve is currently finishing a book of essays on aesthetics, forthcoming from the University of Chicago Press.

While de Duve’s residency includes talks that are reserved for graduate students only, including “Why Kant Got it Right” and “Do Artists Speak on Behalf of All of Us?,” a couple of his lectures are open to the public. The first, “Le sens de la famille”: Aesthetics as the Transcendental Ground of Democracy, takes place on Wednesday, Nov. 4 at 8 pm at CalArts (Butler Building 4). De Duve writes of this lecture:

In the very first sentence of its preamble, the 1948 Universal Declaration of Human Rights mentions “the inherent dignity and equal and inalienable rights of all members of the human family.” Let’s notice the postulate that was slipped into that first sentence: to be a human being is to be a member of the human family. With the help of Kant’s notion of sensus communis, I shall attempt to show that, whereas in the political realm, the “human family” is a highly problematic concept, in the aesthetic realm of art, it legitimately acts as the transcendental foundation of democracy.

In addition to the talks at CalArts, de Duve is the keynote speaker for the Aesthetics & Politics upcoming conference When is Art Political? at REDCAT on Friday. His address, “Suzanne McClelland’s Call With Information,” is followed by a conversation between de Duve and Martín Plot, the A&P program’s Research Fellow in Political Thought.