“They may be small, but don’t call them toys,” said Martha Ferrara, referring to projects created in “Xsml,” the six-week special skills workshop she taught on designing and creating miniature costumes earlier this semester. Ferrara is an award-winning costume designer on the faculty of the School of Theater’s Costume Design Program. For her workshop, students from a variety of disciplines—costume designers, experimental animators, puppeteers and a couple of visual artists—learned to design and create patterns for costumes in 1/4 to 1/3 human scale.

Ferrara noted that “costume designers are storytellers.” The skill of designing in miniature is essential for creating unique, believable characters for stop-motion animation and other projects involving small-scale figures. Behind the scenes, CG and hand-drawn animators use three-dimensional prototypes to help them understand how clothing will drape and fall with a character’s movements. Ferrara pointed out how the yellow lozenge shaped title characters of Illumination Entertainment’s current CG film Minions are made believable by wearing overalls scaled accurately to their figures. 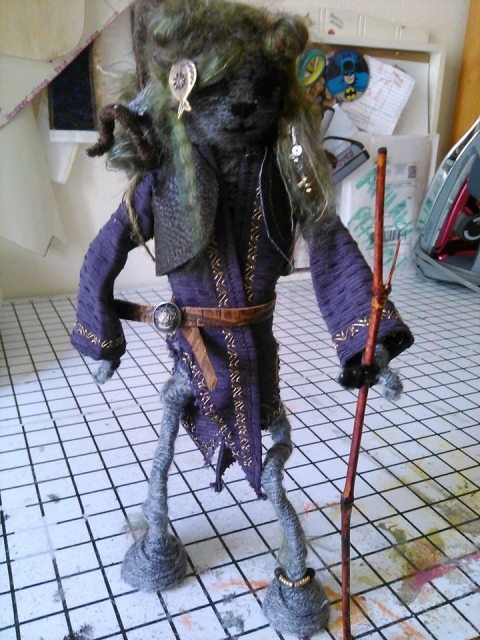 The challenge for those designing in miniature is to make the costumes as authentic as possible within the small scale. Everything must be in proportion including the length of the stitches, buttons and hooks and the texture and pattern of the fabric. “First, students learn the basic technique,” said Ferrera, “and then they go on to make clothing for miniature scale figures they wish to bring to class. Some of the figure armatures are of their own devising, and others have used utensils or soap bottles or lamp bases or twigs.”

Students created costumes to reflect the meaning of their characters. With the goal of bringing abstract concepts to life, Aphton Corbin (Film/Video BFA 16) designed the “Personification of Butterflies in the Stomach.” Maggie Clapis’ (Theater BFA 18) character personifying Mythology was attired in a small-scale coat of miniature patchwork. Others made such distinctive characters as Meredith Peebles’ (Theater BFA 18) futuristic Betty Bot 3000 and Fawn Quinn’s (Theater BFA 18) mythic wanderer Jacobi. Will Shirey (Theater MFA 18) outfitted his hybrid creature Frog Head-Bird Hands in a respectable jacket, vest and tie.

“Xsml” concluded on Oct. 23. Ferrera is following it with “Top That,” a special skills workshop exploring “the totemic power of hats and headdresses.” The classes are part of a new series of  theater studio labs within the BFA Design and Production program. These labs, covering a wide range of metiers, are designed as intensive study-based activities that integrate existing learning goals into laboratory settings where skills are actively applied and conceptual thinking is emphasized.