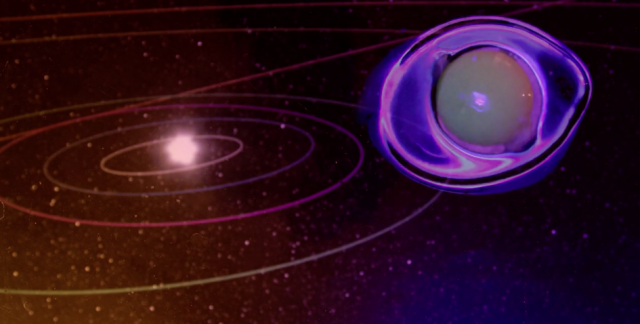 Come Closer, an animated short film about the dwarf planet Ceres, is one of 16 finalists in the first competition sponsored by the Houston Cinema Arts Society (HCAS) in partnership with NASA. Produced and directed by Amia Yokoyama, an MFA-2 student in CalArts’ School of Film/Video’s Program in Experimental Animation, this compelling short subject imaginatively explores many mysteries of this little-known planet.

The film competition—the first for HCAS and NASA—drew 194 entries from 22 countries and 32 states. The 16 finalist films will be screened at CineSpace Day at the Houston Cinema Arts Festival on Nov. 13 at 7 pm at The Museum of Fine Arts, Houston. Prize money for First Place is $10,000, Second Place, $5,000 and Third place, $3,000. Two additional categories will be awarded $4,000 each for “Film Best Depicting Benefits to Humanity from the International Space Station” and “Film Best Depicting Spirit of Future Exploration of Space.” Winners will be announced at the end of the screening of the finalists’ films.

An email interview with the filmmaker follows:

24700: What is the genesis of your interest in Ceres?
Amia Yokoyama: Inner and outer space make me question what I know about my own reality, which I have found is very little as it is always in flux. Ceres may hold answers or at least suggest potential narratives about the genesis of our solar system. It may have seeds of life, explanations of where and how life came from, harbor extraterrestrial life, etc. The search for life on other planets liquidates the definition of what it is for a thing to be alive. I find that thrilling and very important work.

Is there much more known about Ceres than what you’ve included in your script?
Since I made this video Dawn (the spacecraft) has descended into its final stage and closest orbit. For us humans it is the closest we’ve come thus far. Dawn will not touch down on its surface, so we can only surmise from images captured by Dawn. I imagine that Ceres has many more secrets to tell.

Is all the information imparted in the film factual?
This is animated supernatural non-fiction. As soon as an object or an image is animated, “comes to life,” could it ever be a fiction, just a figment? Ceres a dwarf planet. Does it have a voice? Yes, perhaps. Does she whisper into Dawn’s ear? Does Dawn have ears– aural orifices to receive telepathic communication from distant celestial bodies? Yes, perhaps. Do you feel more like a person or a human today?

Did your animation style for this film evolve from previous projects or did you design it from scratch for this project?
My animation style has been a life-long evolution. But the images and the narration were created just for this project. Once the process has begun it’s more of a stream of consciousness type movement through conceiving, designing, shooting, editing. It’s a carefully selected selection of various scratches from long stylistic evolution.

Did other CalArtians work on the project with you?
This was a one-person production, but my extremely talented and knowledgeable roommates, Angela Stempel and Caitlin Craggs (Film/VIdeo MFA 2) are always on-hand with savvy technical advice, encouragement, and productive feedback.

How did you know about the Houston competition?
From a CalArts Film Video email blast. Sometime I open them and read them. If they have anything to do with NASA, I pay attention.

Did you create the film specifically to enter it in this competition?
Yes, I made the entire thing in June of this year. Did not sleep much and did not communicate with the outside world.

Were you surprised that you were chosen as a finalist?
No, if I thought I would not be chosen I would not have submitted. That said, I am extremely honored and grateful that I’ve been included.