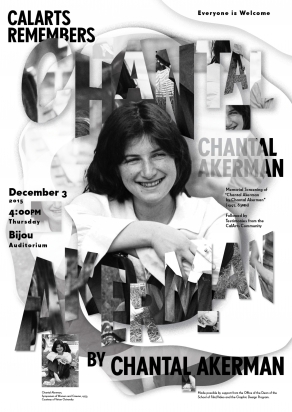 On Thursday (Dec. 3), CalArts School of Film/Video, headed by faculty Bérénice Reynaud, Lee Anne Schmitt and Abigail Severance, hosts a memorial for the late Belgian avant-garde and pioneering feminist filmmaker Chantal Akerman. Akerman, who passed away on Oct. 5 this year, was a huge influence on various directors such as Bela Tarr, Gus Van Sant and CalArts faculty Nina Menkes.

Akerman completed her first short, Saute Ma Ville, at age 18 and at 25, she directed Jeanne Dielman, which The New York Times called the “first masterpiece of the feminine in the history of the cinema.” She completed about 60 works, the last of which was this year’s No Home Movie, a film that documents her conversations with her mother just months before her mother’s death.

Many of [Akerman’s] films are about a girl/a woman whose desires, passions, longings, and obsession with an unspoken past are too big to be contained in Brussels alone. In her films, women run away, cut classes, hitch-hike, sleeplessly walk the streets at night, love two people at the same time, strive to marry the wrong person, stalk female ex-lovers, commit murders, travel throughout Europe, go to America, to Eastern Europe, illegally cross borders—in situations that go from the banal to the surreal.

A seductive emotional violence bursts at the seams. Language often drifts, a love letter turns into an obsessive diary or a schmaltzy song, a simple note into a surrealist catalogue, a word of consolation into a list of possible catastrophes. The excess contained in Akerman’s signature frontal shots pours out in language, in pleasure.

Thursday’s memorial, which takes place at the Bijou Auditorium at 4 pm, will feature a film screening of Chantal Akerman by Chantal Akerman, the filmmaker’s 62-minute self-portrait, which takes audiences through her career, aided by critics Emmanuel Burdeau and Jean Narboni and filmmaker Luc Moullet. The screening is to be followed by remembrances from the CalArts community.

Above: A clip from Chantal Akerman’s ‘Jeanne Dielman.’