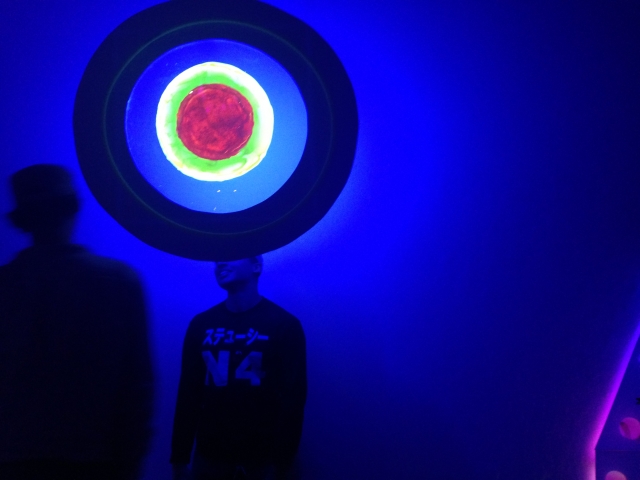 Antonio Perez (Art BFA 17) is a multidisciplinary artist in his third year of the bachelor’s program in Art at CalArts. On the night of his opening in late November, we met with Perez to chat a little bit about his mid-residency exhibition, PARADISE, which was on view in the D301 Gallery from Nov. 16–21.

24700: Congratulations on your mid-res exhibition! You titled your show, PARADISE. Could you talk a little bit about that?

Antonio Perez: Thank you! Yeah, I’ve always had an image of myself escaping reality, going to the woods and growing my own farm, and everything being organic around my house. So I’ve always dreamt of escaping from everything, but I found out that that’s not totally possible because of the environment that I’ve been growing up in and it’s hard to retract from it—I would feel isolated, and I don’t know if that’s something I’d like.

24700: So in your work the idea of ‘paradise’ is expressed through neon lighting, fake fruits and vegetables. How did you mess with the concept of PARADISE?

AP: So in working on this show, I also thought of Adam and Eve. What if history repeated itself and the story of Adam and Eve would be based in the future? What if it weren’t just a snake bringing an apple? What if it were just a bunch of vegetables in this beautiful world that we all grew up in? And not having the story go the way it went, what if we all just grew up in that beautiful environment?

AP: You know what? I don’t know, I don’t know if there would even be an end! That’s the scary part. There would never be an end. We are all born in this world. 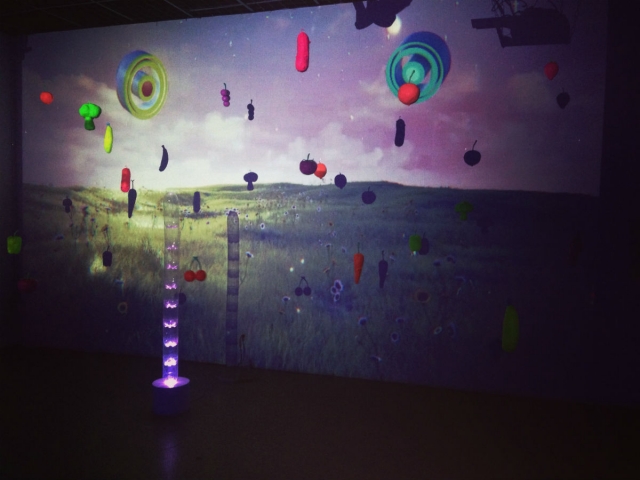 24700: Could you talk a little bit about the materials you used for this show, as well as the four large cushions you created using faux fur, as they seem to be a central component, which invites participation?

AP: PARADISE is an installation, and although there are a lot of sculptures that could be viewed individually, this was more of an experiment, combining everything together. Basically, all the work that I’ve been doing at CalArts the past three years comes together in this exhibition. I’ve been using a lot of transparent materials, acrylic, paper, balloons and LED strips. I love working with visuals, sculpture, lighting and 3D effects.

For the cushions, I used found materials to stuff them. First, there was a bunch of foam from Ikea furniture that I found near my house. Then I used cardboard corners from framing, which I collected at my job where we receive large shipments of frames. I probably collected around 10 bags of the cardboard corners! I also saved a lot of the bubble wrap and foam that we use from the trucks and I used a bunch of pillows, which I found as well.

24700: What were some of the challenges you had putting this show together?

AP: Coming up with an idea that wouldn’t seem overbearing. With so much that’s going on around us on a daily basis, I just wanted to create an environment for everyone to feel relaxed. It’s basically a chill room, where everyone can catch up and meet someone new in here.

24700: There are four separate videos in PARADISE. Tell us about the collaborations that took place to produce this work?

AP: I’m not very technical with Cinema 4D, so I collaborated with James Hurwitz (Music BFA 16), another CalArts student in the Music Technology & Digital Arts Program. I gave James images of fruits and vegetables, which I made on Illustrator and then he rendered them in 3D and Cinema 4D, and basically used gravity to make them bounce against each other. This work is compiled into two videos, which are displayed alongside each other with a third video in the middle of a 3D rendered river stream, which I manipulated. The visuals projected onto the fruit and vegetable sculptures were created by my little sister’s boyfriend, Gerardo Orozco, who is a video game designer. Gerardo really wanted to be a part of the show, and so I let him design those graphics by providing him with the idea and sketches, after which, he basically just flew with it.

24700: What do you hope visitors will take away from the experience of your installation?

AP: Through PARADISE, my goal is to bring the visitors life and snap them out of what they were thinking originally before they entered the room.