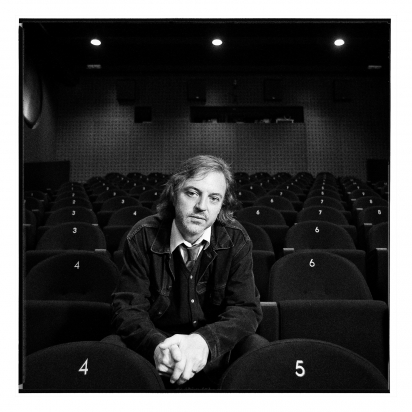 The December 2015 issue of the international film magazine Sight & Sound (from the British Film Institute) features a profile on filmmaker and CalArts alumnus Travis Wilkerson (Film/Video MFA 01) in its “Wide Angle” section. The write-up, titled “Left to His Own Devices” and written by film critic Neil Young, gives the reader a bird’s-eye view of Wilkerson’s filmography, concluding that his work is “difficult to embrace, impossible to ignore.”

Wilkerson is known for films that combine maximalist aesthetics and radical politics. “His aesthetic is confrontational, mistrustful of anything resembling slickness or sugarcoating,” notes Sight & Sound. His experimental documentary An Injury to One (2002)—named one of the best avant-garde films of the decade by Film Comment (the Film Society of Lincoln Center)—explored the 1917 lynching of union organizer Frank Little in Butte, Montana.

For the 2012 documentary, Far From Afghanistan, Wilkerson was one of five politically progressive filmmakers (along with Jon Gianvito, Jon Jost, Minda Martin and Soon-Mi Yoo) to contribute to the film. Inspired by the collaborative 1967 film Loin du Vietnam, the five used their work to raise societal consciousness about the war in Afghanistan, officially the longest war in U.S. history.

A one-man band who always takes care of editing and cinematography, Wilkerson has insisted on ploughing his own ornery furrow. He can be called, with only slight exaggeration, the political conscience of 21st century American independent cinema.

Sight & Sound is available on newsstands and through subscription.

Above: Trailer for Travis Wilkerson’s ‘Machine Gun or Typewriter?’