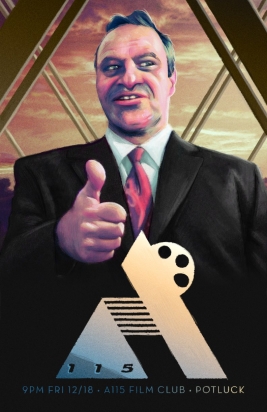 The A115FILMCLUB’s final screening is on Dec. 18. | Image: Courtesy of the club

After a nearly three-year run, CalArts’ A115FILMCLUB has its final screening on Friday (Dec. 18) in Room A115, at the back of the experimental animation studio. The weekly, late-night screenings have been a mainstay for those in the know—with organizers creating events and happenings that expand ways for viewers to experience films.

Friday’s event includes a retrospective of original works made for the club and a potluck celebration. The evening is capped by a screening of a secret final film.

The A115FILMCLUB’s series has included a poolside extravaganza, live gamelan accompaniment and episodic narratives, all of which helped to re-contextualize both new, old and unfamiliar films. This closing semester has included a special sneak preview of lost 1973 animation Belladonna of Sadness, and screenings of films that have been largely unseen, such as the slime mold documentary, The Creeping Garden, and Les Blank’s newly restored A Poem is a Naked Person, with an introduction by CalArts film faculty Gary Mairs.

The A115FILMCLUB Performance Retrospective and potluck begins at 9 pm on Friday. The screening of the secret film is at 10:30 pm.

Above: Last semester’s trailer from A115FILMCLUB.