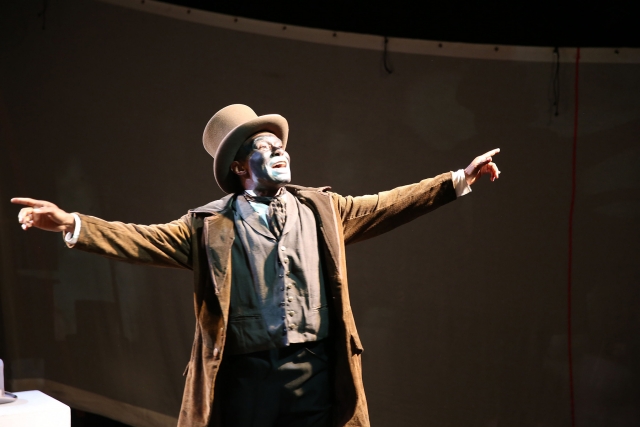 Performa, the visual art performance biennial, recently presented CalArts alumnus Edgar Arceneaux (Art MFA 01) with the Malcolm McLaren Award for his play Until, Until, Until…, co-written with artist and filmmaker Kurt Forman. The production was workshopped with CalArts students and alumni in October as part of Arceneaux’s Artist in Residence at CalArts’ Center for New Performance (CNP).

In 1981, the African-American Broadway actor and performer Ben Vereen was invited to perform for then president-elect Ronald Reagan. His was a two-part performance paying tribute to Bahamian vaudeville performer Bert Williams, who was forced to wear blackface in his performances. Vereen, in homage, did the same.

More from The Los Angeles Times:

In the first part, he dressed up in Williams’ stage persona—blackface and all—and performed a rousing rendition of the show tune “Waiting for the Robert E. Lee,” a razzle-dazzle number about a cotton steamer named for a Confederate general.

The song and dance felt jarring—and it was meant to be. For in the second half of the act, Vereen flipped the script. Still in character as one of Williams’ humble stage personas, he offers to buy the wildly clapping Republican audience a drink but is unable to when he is denied service because of the color of his skin. The piece ends mournfully, with Vereen singing Williams’ legendary tune “Nobody” while removing the blackface makeup—a black man whose blackness is accepted only when it is masked by exaggeration on stage.

“Edgar stepped out of his poised and poignant video installations to bring us into a profoundly emotional space,” Performa founder RoseLee Goldberg said about Arceneaux’ work when she presented the award. “It is a work that will continue to resonate as we further develop the project.”

The Malcolm McLaren Award is a $10,000 award given to an artist 40-years-old or younger who has “demonstrated the most innovative and thought-provoking performance during the three-week Performa biennial.” It is named after British artist and provocateur Malcolm McLaren, whose career highlights included organizing the seminal punk-rock band Sex Pistols.