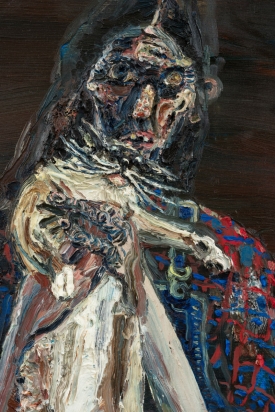 This week, Mark Moore Gallery in Culver City, Calif., presents Hoof, a solo show from CalArts alumna Allison Schulnik (Film/Video BFA 00), her fourth for the gallery. In advance of the opening on Saturday, Jan. 9, the artist—who studied experimental animation at CalArts—talked with Broadly about her art practice and animation. Writer Olivia Parkes describes Schulnik’s world as “populated with the marginal and maimed: crones, gnomes, and mermaids. The artist celebrates that which is normally cast out, bringing out the life in dead matter.”

Later in the interview, Schulnik’s asked about the relationship between all the different media in which she works:

In 2014, the artist and filmmaker released her claymation and stop-motion short film Eager to much acclaim. Solo exhibitions at ZieherSmith in New York and The Wadsworth Atheneum in Hartford, Connecticut, featured Eager-related paintings, sculptures and works on paper. The upcoming show at Mark Moore will be Schulnik’s first painting show in three years.