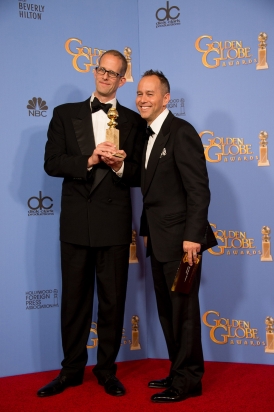 For Best Animated Feature Film, the Golden Globe is awarded to “Inside Out,” directed by Pete Docter and Ronnie Del Carmen. Pete Docter and Jonas Rivera pose with the award backstage in the press room at the 73rd Annual Golden Globe Awards at the Beverly Hilton in Beverly Hills, CA on Sunday, January 10, 2016. | Image: HFPA Photographer.

Last night (Jan. 10), the 73rd Golden Globe Awards were held at the Beverly Hilton Hotel in Beverly Hills, Calif. Hosted by actor and comedian Ricky Gervais, the awards honor excellence in film and television, both foreign and domestic.

In his acceptance speech, Docter said:

Wow. You know, when I was in junior high, literally, my goal was to make it through the day with no one noticing me. Obviously, something went horribly wrong tonight. But the point is we felt like growing up is really hard, and that’s a worthy subject to make a movie about.