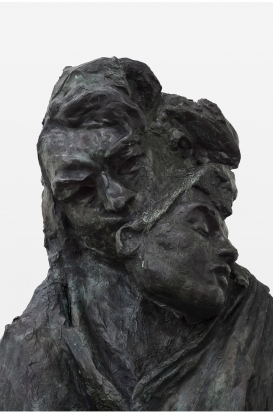 Through May 22, visitors to the Los Angeles County Museum of Art (LACMA) may view the exhibit Liz Glynn: The Myth of Singularity, a group of eight bronze sculptures by Los Angeles-based artist and CalArts alumna Liz Glynn (Art-IM MFA 08).

In 2013, Glynn performed The Myth of Singularity (After Rodin), in which she explored, along with a group of sculptors, the process of replication, recombination and shifts in material and scale often used by Rodin in producing works later regarded as singular acts of brilliance. It was the first of five performances titled [de]-lusions of Grandeur. For each of the performances, Glynn conducted extensive research on works in LACMA’s collection by Rodin, Alexander Calder, Richard Serra, David Smith and Donald Judd, and created each work in response to the process of creating, moving and erecting large-scale sculptures and the Herculean human efforts necessary to do so.

For Liz Glynn: The Myth of Singularity, the artist produced sculptures from plaster props generated during the After Rodin performance. The sculptures are installed in four places throughout LACMA’s campus.

“It is exciting to see how a performance—usually defined by its ephemeral nature—generates a massive, solid bronze suite of sculptures,” says LACMA’s Associate Curator of Special Initiatives José Luis Blondet in a press release. “We are pleased to see an artist engage so rigorously and imaginatively with our permanent collection. Installed throughout the museum grounds, we wanted to provide different contexts in which to see the sculptures, from public spaces to more intimate settings like the Impressionist galleries.”

Liz Glynn: The Myth of Singularity