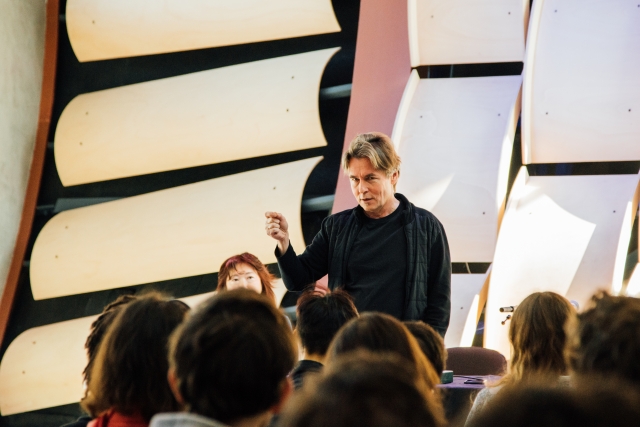 On Jan. 15, principal conductor and artistic advisor of London’s Philharmonia Orchestra Esa-Pekka Salonen paid a visit to CalArts and delivered a lecture on text and art music at The Wild Beast as part of The Herb Alpert School of Music’s Visiting Artist Lecture Series.

Salonen served as the conductor and music director of the Los Angeles Philharmonic Orchestra from 1984 to 2009. During his tenure, the orchestra gave 120 pieces their world or American debuts and commissioned more than 54 new works. The resurgence of the LA Phil sparked fundraising efforts to complete the Walt Disney Concert Hall in Downtown Los Angeles.

In a 2007 profile for The New Yorker, Alex Ross writes of Salonen and the LA Phil:

The Salonen era in L.A. may mark a turning point in the recent history of classical music in America. It is a story not of an individual magically imprinting his personality on an institution—what Salonen has called the “empty hype” of conductor worship—but of an individual and an institution bringing out unforeseen capabilities in each other, and thereby proving how much life remains in the orchestra itself, at once the most conservative and the most powerful of musical organisms.

At the Wild Beast lecture, Salonen encouraged students to send him music, saying that he is very interested in what young musicians and composers are doing. He also talked about the importance of having a mentor, telling the students how much his mentors have helped him over the years.

When asked about his inspiration, he answered, “I know nothing about inspiration. All I know is to keep grinding. Composing music is similar to churning butter: absolutely nothing happens for a very long time, but if you keep churning, grains suddenly appear in the cream and in a few seconds it becomes butter.”