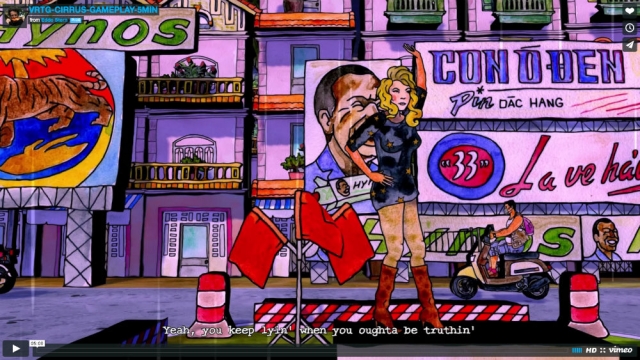 Above: A video from Eddo Stern’s ‘Vietnam Romance.’

The Structuring Strategies series at CalArts welcomes artist and game developer Eddo Stern to this week’s screening on Tuesday night (Jan. 26) at 7:30 pm. Stern’s artistic practice is dedicated to exploring the gray area between art, technology and gaming as well as discovering new modes for documentary and narrative.

Stern is often described as a pioneer of the still-evolving machinima genre, which involves creating animated films using a software typically used to make video and computer games. His notable early projects, including the 1999/2000 installation Runners, employed three projection screens, each depicting a character borrowed from and operating in the EverQuest game’s environment. In Runners, the main player was able to control three characters, making decisions about which character to embody and which others to sacrifice. Stern has also experimented with and incorporated video in his works, including Sheik Attack (1999/2000), in which he used footage from 90s video games to recreate and critique his military service in Israel.

A professor in the Design Media Arts department at UCLA and the founder and Director of both UCLA’s Game Lab and the annual Game Art Festival at the Hammer Museum of Art, Stern’s works have been exhibited at venues including the Tate Gallery Liverpool, Sundance Film Festival, Haifa Museum of Art, Museo Reina Sofia, Electronic Entertainment Expo (E3), MuHKA, the Walker Art Center and the Game Developers Conference, among many others.

His playable installation Vietnam Romance (2015) was on view at Postmaster’s Gallery in New York from June 6-July 18, 2015. In her review, The New York Times’ Martha Schwendener discusses Stern’s ability to create a mediation on war and gaming through the piece.

What does Vietnam Romance add to the conversation about war and video games? The perversion of a protracted, unpopular war transformed into mass entertainment is summed up in Mr. Stern’s tagline for this work: “If you hated the War but liked the Movies, you’ll love this Game!” In terms of our current moment, drone attacks by the United States have been compared to waging war via PlayStation. Mr. Stern’s work might be a cautionary tale of what happens when the lag time between war and gaming technology is virtually erased.

Stern’s latest game is the sensory deprivation-themed Darkgame, which explores communication and conflict under stress from isolation and deprivation.

Above: A video from Eddo Stern’s ‘Darkgame.’